The American Federation of Government Employees organized the rally on Oct. 26, where union leaders urged SSA to make several major changes to its workforce policies, like improving telework opportunities and increasing employee pay. The rally also built on the union’s demands from...

The American Federation of Government Employees organized the rally on Oct. 26, where union leaders urged SSA to make several major changes to its workforce policies, like improving telework opportunities and increasing employee pay. The rally also built on the union’s demands from an Oct. 20 town hall to boost funding for the agency in fiscal 2023.

“SSA cannot serve the public without a quality workforce,” AFGE National President Everett Kelley said at the rally. “It should be no surprise to any of us that despite all of the efforts of AFGE, there are growing backlogs in the field, more service delays on the 800 numbers and a long line at the field offices across the country. We’re here today to say, ‘enough is enough.’”

SSA is facing a 25-year low in agency staffing levels, currently operating with just below 60,000 total employees. Between March and August of this year, SSA lost 1,000 field office workers nationwide. And the problem is about to get worse — according to a recent AFGE-distributed survey, four in 10 SSA employees said they plan to leave the agency within the next year.

Jessica LaPointe, president of AFGE Chapter 220, which represents 26,500 field office workers, said the lack of back-office processing time and limited telework opportunities, as well as inadequate training and low pay, drive much of the agency’s staff attrition. With many leaving SSA, the workload continues to grow for those who remain. And even after hiring more workers, it typically takes two years for a new field office employee at SSA to become proficient at their job, and five years for them to “hit their stride.”

“To make matters worse, only 26% of [AFGE survey] respondents agree they received adequate entry level and ongoing training,” LaPointe said at the rally. “Mentors are often too busy handling mounting work and do not have the time to dedicate themselves to trainees.”

Tensions between managers and employees place even further strain on the workforce. LaPointe said micromanaging and “hyper-monitoring” employees are symptoms of a larger problem.

“It’s a culture that is set up to be a bullying culture,” LaPointe told Federal News Network at the rally. “The underfunding is driving it and the staff leaving is contributing to it. Workload demands leave the employee feeling undervalued, under cared for and ultimately deciding to leave because it’s not worth it anymore.”

In the Partnership for Public Service’s 2021 Best Places to Work in the Federal Government rankings, SSA placed last or second to last among large agencies for work-life balance, effective leadership and innovation. Pay satisfaction also dropped 6.2% between 2020 and 2021 for SSA employees.

“Employees are overloaded, overworked and underpaid. SSA used to be one of the best places to work in the federal government. It’s now among the worst,” Kelley said at the rally.

The poor workforce morale and low staff numbers are also coupled with a backlog of requests at SSA, which some lawmakers have blamed on telework. But AFGE Council 215 President Rich Couture said the backlog built up due to a lack of a flexible telework policies, causing employees to leave for other jobs with better telework opportunities, and the workload to grow exponentially for those who stayed.

“This agency is going to lose thousands more employees if it doesn’t have a robust telework program,” Couture told Federal News Network at the rally. “And that’s what’s going to lead to even worse waiting times, even worse lines out the door, even worse public service. Telework is not the problem underlying the agency’s severe wait times in the field offices. It’s the fact that we don’t have enough people to do the work, period.”

“SSA is not currently renegotiating the telework policy with AFGE as the parties have agreed to continue under our current negotiated provisions at this time,” Hinkle said in an email to Federal News Network. “We engage often with our employee unions to meet our bargaining obligations. Under Acting Commissioner Kilolo Kijakazi’s leadership, we were one of the first federal agencies to reach agreements with all our unions on reopening our offices earlier this year, we have reached 47 mid-term agreements with our labor unions, and we secured collective bargaining agreements with two of our unions and will begin renegotiation with our third.”

But Couture said negotiations for the sections of the contract that SSA’s Office of Labor-Management and Employee Relations (OLMER) agreed to reopen have been slow to progress.

“Every single agreement we’ve reached has been the result of fighting for weeks, if not months, at the bargaining table over matters that, under prior administrations and prior OLMER leadership, would have taken days, weeks at the most,” Couture said at the rally.

The reopening of some parts of the AFGE national contract began in a process to move forward from a more limited union agreement, created during the Trump administration, Couture said. Although AFGE and SSA renegotiated part of the contract back in July to restore previous levels of official time — the allotted amount of time employees can use to complete union-related work — he said other negotiations have come to a standstill.

The lack of these types of work incentives has created high staff attrition and poor work-life balance at the agency, according to AFGE. Kijakazi has also expressed concerns about poor employee morale.

Part of the solution that AFGE urged was to increase pay and retention incentives, LaPointe said. That’s particularly crucial for the customer service representative position in field offices and teleservice centers, she added. The position is on the pay grade for General Schedule 8 (GS-8), with a salary roughly between $42,600 and $55,400.

“Increasing the pay would really cure a lot of our problems,” LaPointe said.

SSA is also operating under acting leadership, though some members of Congress have heightened calls on the Biden administration to name nominees for commissioner and acting commissioner — the agency’s top two positions. The lawmakers said permanent leadership would help address ongoing workforce challenges.

Under a continuing resolution that will fund the government through Dec. 16, SSA received nearly $100 million in additional funding. Hinkle said the funding will go toward hiring efforts and providing overtime pay to help address workloads.

“Our employees are dedicated to providing timely, accurate and respectful service to the millions of people who turn to us for assistance each year,” Hinkle said. “This additional funding will allow us to maintain service while Congress and the executive branch work to reach agreement on our fiscal 2023 funding. Even with incredible efforts from Social Security employees, we need the president’s full fiscal 2023 budget request to improve service.”

AFGE called for an additional $1.7 billion above the Biden administration’s fiscal 2023 budget request of $14.8 billion for SSA.

That extra funding would be broken down into 60% toward staffing resources, 18% to fund the agency’s Disability Determination Services, 11% for IT modernization and the rest going toward increasing security in SSA field offices.

“It’s time for Congress to end years of underfunding and provide the agency what it needs in December by passing a fiscal 2023 budget with $16.5 billion for SSA,” Kelley said at the rally. “Together, we will ensure SSA can avoid the looming staffing crisis and step up with pride in providing the public with the service that it deserves … Together, we will make this change. Together, our voices will be heard.” 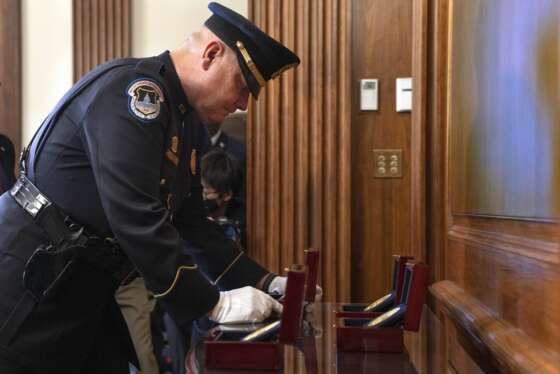 Congressional Gold Medals presented to those who protected the U.S. Capitol on Jan. 6, 2021