The NW Queue isn’t perfect. Despite some differing numbers, the backlog of disability claims is higher now than it was before VA stood up the NW Queue. And veterans service organizations say they’ve lost the view they once had into individual veterans’ claims.

Thomas Murphy, acting undersecretary for benefits at the Veterans Benefits Administration, said as of the latest count Feb. 14, there were roughly 99,000 claims in the backlog.

“To say that we’re going to get to zero, that’s just going to happen, it’s not the right thing to do,” he said Feb. 14 before the House Veterans Affairs Disability Assistance and Memorial Affairs Subcommittee. “But it can be smaller. Any system you have, no matter how good it is, can be better.”

One reason for the backlog is that more veterans are submitting more claims.

“As we get more efficient, more veterans are aware of benefits that are available to them,” said Willie Clark, deputy undersecretary for field operations at VBA. “They come in and submit more claims. Also, we’re taking a more balanced approach to the work that we’re doing.”

VBA in the past perhaps focused its time too much on the backlog, Clark said.

“The challenge was that some regional offices had large backlogs, and veterans in those states were often left in limbo, even if the regional offices in other states would have been able to process the claims faster because of not being so busy,” Bost said at the Feb. 14 hearing.

This location factor often contributed to the wide range of processing times for veterans’ claims back in 2015, Murphy said. “Some veterans received a decision from VBA in 106 days, others in more than 213 days.

Murphy also sees progress in other places since the department implemented the Queue in all 56 regional VBA offices.

The average number of days for VBA to make the first developmental action dropped from 25 to 10 in 2017. The average time for a rating decision fell from 29 to 16 days. Award time dropped from eight to four days, and the authorization time fell from four to two days, he said.

The NW Queue also breaks up a veteran’s claim into individual sections, rather than having one employee work a single case from start to finish. Now multiple VBA employees can work on one claim.

“It does not make sense to me on how having multiple claim processors completely review the same file can possibly save time,” Bost said.

Before the Queue, veterans service organizations typically had 48 hours to review paperwork before the veteran received a decision. This often gave VSOs a chance to check or correct any mistakes, but these organizations say they don’t have that opportunity now with the NW Queue.

“Every action that we take on a veteran’s claim has a subsequent reaction, and what we’re stressing is that we want pride and ownership from our employees in every action they take on a veteran’s claim, whether it’s an entire claim or pieces of a claim,” said Ron Burke, assistant deputy undersecretary for field operations at VBA. “To that point, what we see is a valued need to route more work to the local station than what we have been doing since implementation.

The NW Queue also lets any VBA employee in the chain stop the process to address a problem or fix a mistake with the claim. The department tracks these mistakes and uses the data to inform its training programs for employees, Murphy said.

Some lawmakers were concerned how the President’s temporary hiring freeze may impact VBA’s ability to process claims and work on the backlog. VA asked for exemptions to nearly 100 health care and construction positions, but positions at VBA weren’t included.

“We do have a hiring freeze in place,” Murphy said. “We also have a movement freeze in place, where we’re not allowing people to move out of our direct labor positions and be promoted into other positions, which leaves me trying to figure out how to deliver services.”

Murphy said he’s not as concerned about filling vacancies, since many regional VBA offices are staffed at 105 percent. He purposefully converted some overtime funding to hire more full-time employees, with the hope that VBA could cut back on overtime expenses and more readily fill vacancies.

VBA also has dedicated employees who only work on veterans’ appeals. Slowly, they’re beginning to bring down the number of appeals. But Murphy said the workload is growing in other places.

“The number of appeals sitting at the Board of Veterans Appeals is growing, because we’re producing them faster and pushing them across to the Board,” he said. 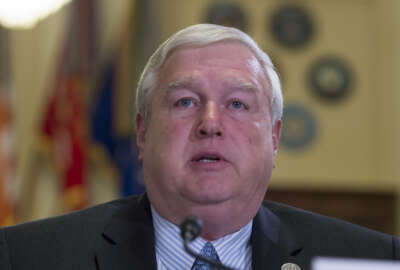 As VA works to eliminate one backlog, one more might emerge