Rep. Jim Bridenstine (R-Okla.) got the nod from President Donald Trump to lead NASA back in September, but the Senate has yet to hold a vote on this confirmation. The delay has members of Congress upset, including Rep. Brian Babin (R-Texas), chairman of the House Subcommittee on Space.

“It’s very, very frustrating and concerning that our agency...

Rep. Jim Bridenstine (R-Okla.) got the nod from President Donald Trump to lead NASA back in September, but the Senate has yet to hold a vote on this confirmation. The delay has members of Congress upset, including Rep. Brian Babin (R-Texas), chairman of the House Subcommittee on Space.

“It’s very, very frustrating and concerning that our agency would be left without a permanent administrator for this long,” Babin said on Federal Drive with Tom Temin. “We’re trying to remedy this situation.”

Babin said he has worked closely with interim NASA Administrator Robert Lightfoot, who announced March 12 that he planned to retire April 30.  Babin complimented Lightfoot but said his hands were somewhat tied being in an acting role.

“Leaving NASA without a confirmed leader is a great way to ensure that some of our programs don’t come together properly,” Babin said. “Fourteen months without a leader is long enough and I think it’s time to get Jim Bridenstine confirmed.”

Some Republican opposition to Brindenstine’s confirmation remains, as well as some GOP senators unable to vote because they are in disposed with illness. Babin said he was not blaming any particular individuals for the delay but said Bridenstine is not the only confirmation held up.

“It’s detrimental to the president’s agenda,” Babin said. “The Senate needs to get busy. There’s nearly 200 appointees and almost 400 bills that we’ve sent from the House, and all of these are sitting in the Senate awaiting action.”

NASA is a complex agency, with satellite work, low earth orbit projects and deep space programs underway. Babin said several vital decisions about the agency need to be made imminently, including a goal from the Trump Administration to return to the Moon.

The first launch of NASA’s Space Launch System rocket and its Orion spacecraft will occur during this administration, and commercial crew partners are working to have their first launches by the end of the year, he said.

“Key decisions about the future of the International Space Station and NASA’s role in low-earth orbit, new science missions to study the earth and far reaches of our solar system are being designed and hopefully to be launched soon,” Babin said. “And now is not the time to leave NASA rudderless.”

Babin sent a bipartisan letter signed by 60 other lawmakers to Senate leaders Tuesday, urging them to confirm Bridenstine. The letter has the support of all GOP members of the House Committee on Science, Space, and Technology, as well as most Republicans on the House Armed Services Committee, he said. Bridenstine is a member of both committees.

“It would be a travesty to America’s space program for it to remain leaderless at this critical time when America’s space industry is making rapid advances that will set the course of space leadership for decades to come,” Babin wrote in the letter.

Some of the criticism leveled at Bridenstine stems from the fact that he lacks an engineering or spaceflight background. Babin said that should not be a deal breaker for his confirmation.

Bridenstine flew combat missions for the Navy in Iraq and Afghanistan, and operated F-18 Hornet and E-2C Hawkeye aircraft. The Oklahoma congressman is also a former executive director of the Tulsa Air and Space Museum & Planetarium, according to the biography on his website.

“He’s literally saved thousands of lives and billions of dollars that have been affected by his decisions,”  Babin said. “There’s no question in my mind and I hope in the senators’ minds that Jim has the technical capacity, the knowledge, the wisdom, and the leadership experience necessary to lead NASA.”

Babin said that despite a limited engineering background, he expected Bridenstine’s aviation experience would help him understand the shared concerns between NASA and the Federal Aviation Administration regarding drone regulations.

“He co-authored with me the bipartisan American Space Commerce Free Enterprise Act, which I think is going to provide a mechanism for the US government to approve commercial remote sensing and private, nontraditional space activities, all while meeting our treaty obligations,” Babin said. “And this basically will hang up a sign that says ‘America is open for business in space.'”

Speaking of the pending omnibus spending package, which Congress has until Friday to pass, Babin said he expected NASA would get its “fair share”with nearly $20 million. Again, he said the Senate is mostly likely to be the hold-up in passing a bill.

“The House passed all 12 of our appropriates bills last year. We passed a budget, but we sent it over to the US Senate and there it just gathered dust,” he said. “So that’s why we’re at this situation today with an omnibus spending bill.” 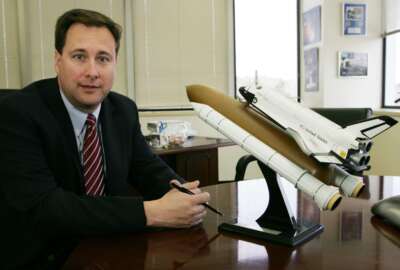 At over 400 days without a permanent leader, no end in sight for NASA 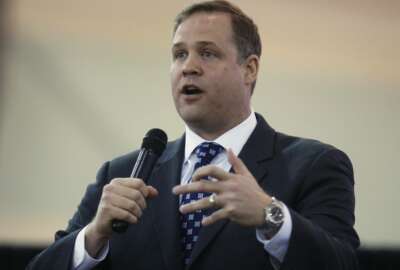