Congress getting back to work after storming of the Capitol

With Congress totally preoccupied with the aftermath of the Capitol riot, and fresh pandemic spending, is there what you might call a normal agenda? For some answers on what to expect near term, WTOP Capitol Hill correspondent Mitchell Miller spoke to Federal Drive with Tom Temin.

Tom Temin: And I guess calling that the aftermath is like calling it tsunami – some water came in after the earthquake. So they are preoccupied with the aftermath and the transmittal of the impeachment and then it gets to the Senate and blah, blah, blah.

Mitchell Miller:  Yeah, there’s a lot going on, obviously. It’s an incredible confluence of things that are actually happening. I was just looking at a shortlist, for example. If you look at it, of course, we have the inauguration of President Elect Joe Biden and Kamala Harris. We also have the transfer of power in the U.S. Senate with the swearing in of two new senators from Georgia – Jon Ossoff, and Raphael Warnock. That obviously alters the dynamic in terms of when an impeachment trial can happen, because that gives the Senate the 50/50 split and then with Kamala Harris then gives them the power to do that. You have all of this happening at once. And then in the middle of it, of course, we have more than 20,000 National Guard members surrounding this fortress that is the U.S. Capitol right now, as we get ready for the inauguration. So it’s just an incredible time, as we all know, but to put this all together and try to move things forward. I think even the top lawmakers who have been here a long time, are really struggling a bit as to how this all comes together. There was a news conference that House Speaker Nancy Pelosi had on Friday. And to go back to what happened with the insurrection here at the Capitol, more than a week ago, she was still very emotionally raw about it, and just absolutely disgusted when she was talking about the people that were actually able to break into the Capitol. And that’s when she announced that there will be one of, of course, many, many reviews that are going to happen. All these after action reviews. She’s got Lt. Gen. Russel Honoré, who of course came to fame with the response to Hurricane Katrina. He is doing a wide-range look at what went wrong. Federal agencies including the Justice Department, Homeland Security, several other agencies, their inspectors general are all going to be digging in on this. And then Pelosi also indicated that she is open to some kind of 9/11-type of review commission that would look at this. So everything is going to be poured over as you can imagine, because it just disgusts people still here on the Hill, the lawmakers, everyone on down the line from both parties that actually came this close. And of course, there was a report late last week from The Washington Post, just how close it got to Vice President Pence. He literally was in within a minute or so of having this mob come toward him if a Capitol Police officer hadn’t distracted some of those people and taking them elsewhere.

Tom Temin: A lot to process as you might say, I wonder if Mrs. Pelosi ordered a new chair for her office just so the guy can’t say I sat in that chair anymore?

Mitchell Miller: That’s right. Well, there was even an interesting point last week where she was speaking, actually, when she signed the article of impeachment against President Trump, she actually did it from the lectern that was grabbed by one of the rioters and paraded around the Capitol in one of those many, many unforgotten images. So that just shows how fresh everything is. They actually recovered that lectern on the Senate side and brought it back and it’s undamaged. But just another sign of a reminder of what happened here recently.

Tom Temin: Well luckily, all it needed was a little lemon Pledge I guess.

Mitchell Miller: Just buff it up and ready to go.

Tom Temin: We’re speaking with Mitchell Miller, Capitol Hill correspondent for WTOP. But is there any formation of a normal agenda that would fund the government, set new policies, the kinds of things you would expect a new Congress to dig into? Because let’s face it with a Democratically-controlled both houses, they’ve got things on their agenda besides cleaning up after the riot.

Mitchell Miller: That’s right. So I think we will start to see a sense of normalcy in the coming days. Now, obviously, that’s going to be complicated by the fact that the Senate impeachment trial is going to get underway roughly at the same time. But I think we’re – for one thing, we’re going to start to see hearings in connection with the nominees from Joe Biden, people that he wants to put at the top of each agency. We are also going to start to see lawmakers really dig in on what he announced late last week, which of course, is his big new stimulus push and the vaccination program that he wants to get going. He wants to get 100 million vaccinations. He wants to get a lot more done in connection with the response to the coronavirus and because all these crazy events related to security around the Capitol and the impeachment and everything have at times overshadowed what’s happening in across the country, which as we know, is just an absolutely deadly increase in the number of COVID-19 cases. The country really doesn’t have its arms wrapped around it. Joe Biden and his administration – that is going to be their top priority. So that’s what the lawmakers are really going to have to be digging into in the coming days as we start to try to settle down into some sense of what at least is an excuse for normalcy right now, as we go into what would be the traditional budget period where we start to review what is actually going to go into this Biden administration budget plan.

Tom Temin: Yes. And they’re going to spend some time going over the 2022 appropriations.

Tom Temin: Even as Congress would normally be starting to look at them and the agencies would be nearly finished with them. I talked to one official who is outgoing Trump administration, and has had actually quite cordial and complete debriefings in secure facilities with the incoming team. It’s worth noting, that’s also going on, some very good transfer work. They said, “Yeah, well, we want to make sure they understand what they need to as they go after the budget.”

Mitchell Miller: Right. And that is encouraging to note, because with all this political noise going on around us, there are, as we both know, a lot of really hard-working federal officials who know how this works – they know that this has to move forward. And there has been a lot of behind the scenes work to try to get this transition moved forward. Obviously, all the attention goes on President Trump and what happens with him leaving office and everything. But really, there has to be that work on the ground between the people that are coming in for the administration’s new policies.

Tom Temin: And by the way, has all of the damage and mess up in the capital been pretty much put back together at this point.

Mitchell Miller: Most of it has. There are signs though, however, that things are not exactly back to normal. I have walked around the speaker’s lobby where unfortunately, a woman was shot and killed just feet from the House chamber. And there is still damage there from the broken door. The window was just basically broken out. And that was where she was climbing through. And there was another window that was completely shattered. There has been a lot of cleanup taking place, obviously. They’ve done in the immediate aftermath, they did several security sweeps. But they have literally been cleaning up. And then what’s interesting, too, is then inside the corners of the Capitol, as everybody has seen, in addition to that cleanup, then you have the scenes that are something out of, you know, Civil War history, which is the massive amount of military personnel inside the Capitol. Initially, a lot of these National Guard members were basically splayed out sleeping on the floor when they could get some rest before they went out on their next duty period. So there has been efforts by lawmakers to try to get them cots to try to get them, you know, make sure that they get the food that they need at specific times. So there is a lot of different kinds of activity inside the Capitol right now that you just don’t normally see.

Tom Temin: And you’re back in your quarters there normally then, too, correct?

Mitchell Miller: That’s right. So everything here is pretty normal. I did notice that as everybody reviewed those pictures that we saw from, and video from all of the insurrection and the rioting, it’s interesting to note from my own personal perspective that I did determine that there was a group in the mob that was on the floor. When I was sitting where I’m speaking to you from right now. They were within probably about 75 to 100 feet from our doors where all the reporters and media staff are. At that time, there’s a picture of Capitol Police. They had actually – these were some of the few people that had been detained inside the Capitol. So really kind of a lucky moment for us.

Tom Temin: Yeah the old time reporters had revolvers. I guess that’s not gonna be in the works though this time around.

Mitchell Miller: Not this time around. We just have – smartphones.

Tom Temin: Alright. Mitchell Miller, Capitol Hill correspondent for WTOP. Thanks so much. 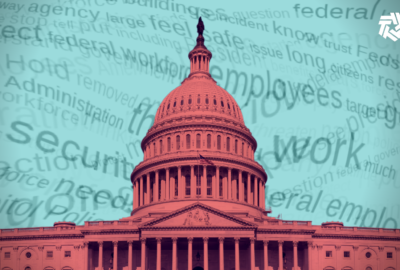 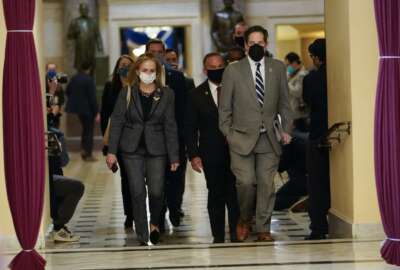 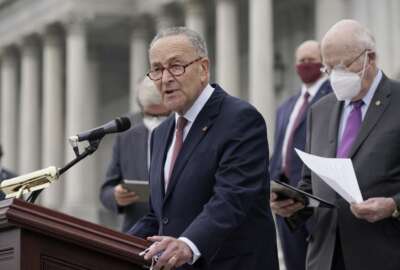