After a decade-long hiatus, earmarks appear to be headed back to the Congressional appropriations process

For the first time in a decade, it’s looking like earmarks are about to make a comeback in the congressional appropriations process. Both parties in the House have agreed to participate in the new earmarks process that proponents say include some safeguards to prevent abuses. And speaking of fiscal 2022 spending, there’s still no telling exactly when...

For the first time in a decade, it’s looking like earmarks are about to make a comeback in the congressional appropriations process. Both parties in the House have agreed to participate in the new earmarks process that proponents say include some safeguards to prevent abuses. And speaking of fiscal 2022 spending, there’s still no telling exactly when we’ll see the Biden administration’s first budget proposal. Jack Fitzpatrick is congressional reporter with Bloomberg Government and he spoke to Jared Serbu on Federal Drive with Tom Temin, to bring us up to speed on the 2022 budget process.

Jared Serbu: And Jack, let’s start with the budget timeline as we begin the conversation with what’s happening on Capitol Hill this week. A little bit later than normal this year, I think at least by this time, we wait expect to see at least a skinny budget from the administration as a new administration comes in. But we don’t even have that at this point. What what’s the kind of broader timeline looking like?

Jack Fitzpatrick: Yeah, it’s looking like the Biden administration is going to be, I would say historically late, maybe for good reason, but definitely very late in sending a budget proposal to Congress. We had heard some of my colleagues who covered the defense beat had heard a little while back, the Pentagon was preparing to send along their portion by early May. But all of this has to go through the White House Office of Management and Budget, and there’s still no OMB director. If Shalanda Young is confirmed as deputy director, she’ll be acting director, and she may actually take the lead on this. But you know, I’ve looked back at the last few administrations and March 14 is actually the latest any of the last three administrations had sent at least a skinny budget. And clearly Biden has missed that goal. So lawmakers really are waiting on something from the White House just on even the top line, how much to spend on defense, non defense. It looks like we’ll probably be off to a very late start on appropriations work.

Jared Serbu: And what do we know about the reasons behind that delay? Is it mostly just due to the tumult during the transition process?

Jack Fitzpatrick: They have blamed the Trump administration for, their word is “intransigence” and not working with them. I’ve talked to Russell Vought, the Trump OMB director about that, and he’s pushed back a lot. There are other factors. As I mentioned, there’s not actually an OMB director. Obviously, also coming in a new administration usually is late. And if you throw a pandemic on top of that, and just other legislative priorities, including a massive stimulus that can push things back. But you know, it’s worth noting, Obama came in with a lot on his plate. And he went faster than Biden has. So I think it’s a confluence of a few different things, just sort of pushing back the budget and appropriations schedule.

Jared Serbu: And as you say, really, the only date we’ve heard so far is that May 3 date for the DoD budget. But it would be unprecedented for DoD to release its budget without the rest of the federal budget for ’22.

Jack Fitzpatrick: Yeah, that has to go through OMB. It would be very strange for them to do sort of a piecemeal budget and say, “here’s what we want for this department and that department.” It’s all subject to review by the White House, according to the normal rules of putting together the budget. So you know, we’d expect that that wouldn’t be sent along until they basically have a whole package to propose to Congress.

Jared Serbu: And just one more beat on budget issues, what do we know about the contours of what that defense budget for ’22 might look like? And how’s that debate shaping up on the Hill so far?

Jack Fitzpatrick: That’s quite a debate among Democrats that is starting to get a lot of pushback from Republicans. There’s been reporting by Anthony Capaccio, one of my colleagues at Bloomberg who covers Defense, saying the Pentagon is preparing for essentially a flat budget, that we get a lot of pushback from Republicans. A flat defense budget, factoring in pay increases and other cost increases is essentially a cut. But you know, there are progressives on the Hill who have said there should be a significant cut. So there’s a debate still among Democrats about whether this is going to be a flat budget, or if they should listen to the progressives and get much more aggressive and actually cut defense spending. But ultimately, spending bills need 60 votes in the Senate. So Republicans are going to have a say, and the way things have gone for a very long time is if you want an increase for any of your non defense priorities, you have to give Republicans an increase for Defense. So I’m not sure any of this is going to be entirely realistic. And whatever we see from the Biden administration will be subject to a lot of debate over the next few months.

Jared Serbu: And I think another piece of big news on fiscal and budget matters is we now have both parties on board at least in the House with returning to earmarks for the first time in what a decade, I think?

Jack Fitzpatrick: Yeah, that was banned after Republicans took the House in 2010, part of the Tea Party wave. And then there had been really an increasing debate among Republicans in Congress about whether to stand by that. Democrats taking the House and Senate kicked this off because they were clear that they wanted to revive at least a reformed version of earmarks. It was a closed vote among House Republicans, there was a pretty tough debate. And ultimately, one of the reasons they voted in their conference to participate in this new system of earmarks was the fact that they allowed members to cast a secret ballot. So we don’t even know where all of the individual House Republicans came down on this. Some of them don’t want to talk about it. But now they are on board and the debate is continuing for Senate Republicans, it also appears to be pretty evenly divided. And we’ll see where they go on that. But it’s a pretty classic debate between the old school appropriator types and the more Tea Party-aligned conservatives.

Jared Serbu: Yeah, even though it may have been the secret ballot that allowed this to happen, you also have – somewhat surprising to me – an overt defensive earmarks by Kevin McCarthy, who’s who’s making the point that this is not actually adding to federal spending in any appreciable way.

Jack Fitzpatrick: Yeah, McCarthy’s stood by it and said, “Look, this isn’t really going to increase spending on regular spending bills, this new rule from the House Democrats caps earmarks at 1% of discretionary spending. That would come out to around $14 billion, which in the context of the federal government is really not that much. The other thing I’ve heard from Republicans McCarthy and Steve Scalise is there were so many complaints about the stimulus and where state and local money would go. There was a tweak in the formula, and Republicans felt like red states basically got minimized and got less money than they should. And some of the Republicans were talking about with earmarks, that’s more congressional control, rather than trusting Biden’s White House and the bureaucrats there. And that’s something that Republicans have talked about, not so much the Tea Party conservatives, but a lot of Republicans who are pro earmarks have said, why not put that power in the hands of the lawmakers. And then you don’t have to depend on the White House, which is now a Democratic White House.

Jared Serbu: And I think another part of the defense has been that there are safeguards in place now to prevent some of the alleged abuses of earmarks that happened in previous eras. What are those, is it mainly just that 1% cap that you mentioned?

Jack Fitzpatrick: That’s one, that’s not the only thing. There are transparency requirements. You’ve got to actually post any of your requests, not only publicly but online in a searchable format. You have to demonstrate that you are basically financially independent of it, you and your spouse don’t have financial connections to wherever the money is going. One of the, I think important ones is at least in the regular appropriations earmarks. This can’t go to for-profits. It’s got to go to state or local government entities or nonprofits. Now, I’m not sure they can track that, so it never goes to for-profits. If you give it to a state government, they may contract it to a private entity. And that’s where the transparency requirements come in. So I wouldn’t say this is totally immune from what could be political embarrassments. I can’t guarantee that this is going to be perfect reforms. We’ll be watching that closely. But it was enough to change it from the old version. So the Democrats felt good about it. And then you saw a majority, at least of House Republicans said they wanted to participate.

Jared Serbu: And back to your earlier point about earmarks maybe helping get member buy-in on individual pieces of legislation. This may be the thing that lubricates an infrastructure bill to finally get through both chambers, maybe?

Jack Fitzpatrick: Yeah, we haven’t seen as detailed rules on how this is going to work for the infrastructure package. But we have heard from Peter de Fazio, that there’s going to be some sort of system of earmarks. It’s going to be very interesting to see how that ties in with the rest of the strategy on an infrastructure bill, because it appears you cannot do earmarks and those specific forms of discretionary spending through the budget resolution – budget reconciliation process, which would allow them to pass something partisan through the Senate with a simple majority. So there are still a lot of questions about is this going to be bipartisan? Is it going to go through reconciliation? Maybe there are multiple infrastructure packages, but earmarks are clearly part of the plan. And if they have to get bipartisan support for at least parts of this, like transportation infrastructure, that could that could kind of help things along and maybe get one or two extra votes from Republicans.

Jared Serbu: You can find this interview at FederalNewsNetwork.com/FederalDrive. 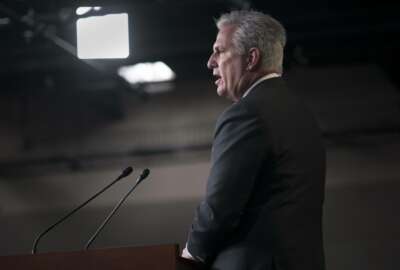