Next question: Will the Senate go along with House oversight proposals?

Stronger inspectors general and more protections for whistleblowers – those are concerns in the House these days. But will the Senate go along? Federal Drive with Tom Temin got the latest congressional outlook from WTOP Capitol Hill correspondent Mitchell Miller.

Tom Temin: And Mitchell, update us on the status – there was a whistleblower bill and there’s an inspector general bill in the House. What’s the latest?

Mitchell Miller: Well, first of all, on the inspectors general, there was a lot of concern in the House about what happened under the Trump administration with former President Trump getting rid of many IGs during his term. In fact, he got rid of five IGs in a very short amount of time, basically saying that he had the power to do that, which he did. Among them, just as one example, Steve Linick, the State Department inspector general, who was investigating then-Secretary of State Mike Pompeo, that he was using the department staff to run personal errands for him and his family. That was one of them. And so basically, the House decided they needed to jump in at least among Democrats, and said “We need to pass some more protections and give more authority, more independence to the IGs.” So they passed this legislation this past week under this inspectors general could only be removed for cause. And they’d be granted authority to subpoena witnesses – testimony from witnesses who aren’t currently government employees. Inspectors general would also have to notify Congress if agencies refuse to provide access to requested information. So this was one area where they tried to bolster things up and then on a committee level related to the whistleblowers – this was in the House Oversight and Reform Committee – they passed a couple of bills last week, one would reauthorize the Merit Systems Protection Board. That actually hasn’t been done for almost 15 years. It also hasn’t had a quorum for several years. This legislation would basically allow whistleblowers to appeal cases in federal court if that board doesn’t issue a decision in the case in six months. And then in some other cases that are more complicated in eight months. And then a second bill, the Whistleblower Protection Improvement Act, co-sponsored by Virginia Congressman Gerry Connolly, that would prohibit agencies from launching retaliatory investigations against whistleblowers. As we know, a lot of different things have come up over the recent years about whether or not whistleblowers are actually getting the protection they need. A lot of Democratic lawmakers don’t think they do. It would bar, basically, them from being retaliated against, in connection with sharing information with Congress.

Tom Temin: And what about the Senate, any stomach in the Senate for this type of thing? Or is it 50/50?

Mitchell Miller: It looks like it’s going to take a little time, especially in connection with the inspectors general. Some of the reservations that were raised by Republicans in the House debate I think are still there in the Senate. There is some concern that actually the IGs could get a little too much power, and that there’s some concern about a potential abuse of power at that level. So we’ll have to see on that. And then the other one, I think it’s just too early to say as it moves through the House, it’s still going to obviously have to get to the full House on the actual whistleblowers. But we’ll see where it goes. Of course, Democrats still have that 50/50 edge with the vice president potentially providing the extra vote, but as we know, on a lot of issues, including infrastructure, it’s still very dicey.

Tom Temin: Sure. And briefly, what is the situation with respect to security on Capitol Hill, clever of Nancy Pelosi to put Liz Cheney on the select committee to investigate all of that.

Mitchell Miller: Right, trying to push back against what’s going to be all kinds of accusations by Republicans that this will be a select committee that is totally partisan, but by getting Liz Cheney on this committee, she’s trying to take away a little of that argument. We’ll have to see what happens. This is actually six months since the attack on the Capitol. So the select committee, House Speaker Pelosi really wanted to get it into place once it was passed last week by the House. She acted very quickly to name eight members and of course, one of them being Liz Cheney, a lot of pushback, by the way from the House’s top Republican Kevin McCarthy on that. He had suggested at some point last week that there might be some retaliation if members decided to go along with House Speaker Pelosi telling some lawmakers reportedly that they would be stripped of their committees. He later denied that, but he did make it very clear, he does not like the idea of having Liz Cheney basically serve at the request of House Speaker Pelosi. So in terms of the committee, they met very briefly, right away. Kevin McCarthy can still name five members himself. He hasn’t indicated a timeline on that. But the speaker has indicated she wants to get this investigation moving very quickly. They will be able to subpoena witnesses. So it’s not as if this committee will just be some kind of political paper tiger, they do have some power to move ahead. And then in terms of the actual security here at the Capitol, we’re getting very close to a possible final decision in connection with bringing down the final security fence around the Capitol Complex. As we’ve talked about over many months there’s still a lot of opposition to having that fence up from members of both parties. But as far as the Capitol itself, they are really getting closer to normal than really I’ve seen since the start of the pandemic. And then even after Jan. 6. However, it should still be noted that there have not been any public groups or schoolchildren that you would normally see coming to visit the Capitol since the early stages of the pandemic, really more than a year now. So that is one thing that is very different still here on Capitol Hill.

Tom Temin: Well, maybe they could bury a wire and everyone would have to wear a dog neck zapperor something to get there if there’s no fence?

Mitchell Miller: Make sure you can’t leave or come in, right?

Tom Temin: We’re speaking with Mitchell Miller, Capitol Hill correspondent for WTOP. And by the way, budgeting – there was a bill on [a] transportation package. But the vehicle, no pun intended for that, could get interesting.

Mitchell Miller: Yes, very interesting. I mean, normally, this would be a fairly basic bipartisan transportation package, the surface transportation package. The House did pass it, $715 billion, interestingly mainly along party lines so still some divisions there. Republicans don’t like a lot of the climate change initiatives that are included in this package. But what’s interesting is that package, despite a lot of division over it, could potentially Democrats, at least hope, could be a building block to go into that $1 trillion bipartisan package that has been tentatively agreed to in the Senate. This is really the first bill that has come together that has more of the nuts and bolts, if you will, on these initiatives related to roads, bridges, water, etc. So it could potentially be folded into that $1 trillion package. But there’s a lot of work to be done, it’s still unclear on how the timing of all this is going to come together. And this month really is critical for the infrastructure package. I know we keep saying that. But this one really is because this is the month that Senate Majority Leader Chuck Schumer had indicated he wants votes on both the bipartisan package as well as this so-called human infrastructure package, which includes child care, education, and a whole lot of other initiatives that Republicans say are just way too broad for infrastructure. But nonetheless, for the Democrats to thread the needle on bringing all these packages together, and then basically having to vote on them one right after the other is going to be very, very difficult in July. I have a feeling as we often do see that it’s probably going to be pushed back and they may need to stick around and in August.

Tom Temin: And very briefly, does the Best Places to Work rankings, which we’ve been covering extensively here – does that come to light on Capitol Hill? Do they notice that?

Mitchell Miller: They do notice that and there is some touting of these agencies that have done a good job. And I think that there is a recognition from lawmakers that actually the federal government, as you know and have reported on, got pretty good marks in connection with what was obviously an unforeseen pandemic, getting 86 out of 100 points on basically that federal agencies – federal employees felt their agencies did support them during the pandemic, and as we’ve talked about over the last year about all the different things related to telework, and that type of thing. So I think there is some appreciation as we’ve also discussed, a lot of times lawmakers are really giving these agencies a hard nudge on making sure that they do more for telework and do more for federal employees. But I think we’re finding that there is some appreciation among members of Congress about what these agencies have been able to do. Now, of course, you’ve got the agencies like NASA and the GAO that are often right there at the top but there were also a lot of other agencies that had to be pretty nimble here. And again, I think there’s some recognition from lawmakers that a lot of agencies really did a good job. 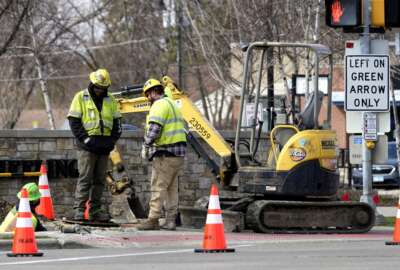 Dems aim for July vote as Congress digs in on infrastructure 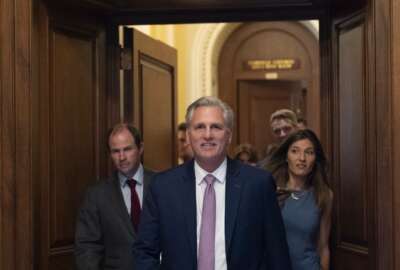 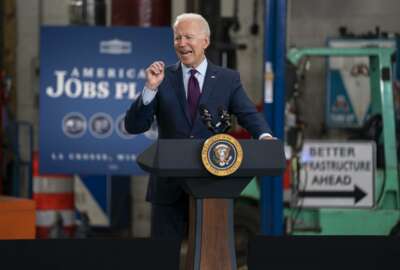