Congressman Gerry Connolly (D-Va.) is trying to drive the final stake through the heart of Schedule F.

The Virginia Democrat is sponsoring an amendment to the 2023 Defense Authorization Act that would effectively end any chance of a new administration reviving the Schedule F concept. President Donald Trump signed an executive order in October 2020 that gave agency heads the authority to reclassify certain confidential, policy-making, determining or advocating positions from the career competitive service...

Congressman Gerry Connolly (D-Va.) is trying to drive the final stake through the heart of Schedule F.

The Virginia Democrat is sponsoring an amendment to the 2023 Defense Authorization Act that would effectively end any chance of a new administration reviving the Schedule F concept. President Donald Trump signed an executive order in October 2020 that gave agency heads the authority to reclassify certain confidential, policy-making, determining or advocating positions from the career competitive service to a new class in the excepted service known as Schedule F.

While President Joe Biden rescinded the EO during his third day in office, there are concerns that a new administration could bring it back.

The Connolly and Fitzpatrick “The Preventing a Patronage System Act” passed the House in May 2021, but it never made it to the floor for a full vote. There isn’t a Senate companion either.

The American Federation of Government Employees (AFGE) is encouraging the House to approve the amendment — one of nine the union is throwing its weight behind.

Several other of Connolly’s amendments also could be voted upon Wednesday night or Thursday as part of the House’s work on the NDAA.

One amendment would codify the Federal Risk Authorization and Management Program (FedRAMP). This bill passed the House in January and has some support in the Senate.

Another amendment would codify the Performance Enhancement Reform Act, which passed the House in September 2021 and the Senate Homeland Security and Governmental Affairs Committee in November.

The House plans to consider both the FedRAMP and PERA bills en bloc as part of a grouping of what many consider non-controversial bills.

There are several other provisions that focus on the DoD or federal workforce.

Rep. Jennifer Wexton (D-Va.) has an amendment that would require DoD to conduct a study on the feasibility and benefits of establishing returnship programs for the DoD civilian workforce.

The report would have to look at how this program could address workforce needs and bolster the knowledge and experience base of the civilian workforce. DoD also needs to describe how the program would be structured and the estimated cost to implement.

Rep. Bennie Thompson (D-Miss.), chairman of the Homeland Security Committee, is offering an amendment to bring Transportation Security Administration employees under Title 5 of the U.S. Code.

The House passed the bill in May that would bring 60,000 TSA employees, including transportation security officers, under the same personnel system as other federal employees. That includes full collective bargaining rights, access to an independent third party for dispute resolutions and the General Schedule pay system.

Sen. Brian Schatz (D-Hawaii) introduced a similar bill in the Senate in May 2021, but it hasn’t moved.

Two other provisions that would impact the workforce include one that would require the Department of Veterans Affairs’ hospitals to submit a locality pay survey to ensure that nurses’ pay is competitive with the private sector.

Another would direct the Government Accountability Office to review the parity between the Federal Wage System (FWS) and the prevailing wage rate for wage grade workers who maintain, repair or help support those who maintain or repair U.S. Navy ships or submarines at the four U.S. Navy public shipyards or at naval bases in competitive job markets. 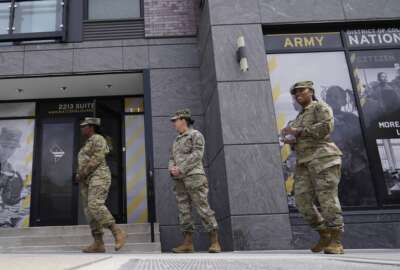