What’s next on the Hill, now that the House has passed the Defense authorization bill

In a bit of progress for regular order, the House last week managed to pass its version of the National Defense Authorization Act. And, members will get down to the 2023 spending bills this week. The Federal Drive with Tom Temin got the latest from WTOP Capitol Hill Correspondent Mitchell Miller.

In a bit of progress for regular order, the House last week managed to pass its version of the National Defense Authorization Act. And, members will get down to the 2023 spending bills this week. The Federal Drive with Tom Temin got the latest from WTOP Capitol Hill Correspondent Mitchell Miller.

Tom Temin  The house has a pretty good unbroken record here, don’t they?

Mitchell Miller  That’s right. It’s kind of like a baseball record, right, keeping a 61 year streak going on passing the NDAA every year. It’s the one thing that members of Congress always point to, because they know they don’t approve a lot of other things on time. But at any rate, they did do that last week, close to $840 billion. As always is the case, that went through a huge amendment process. Just to highlight some of the things that went through and did not go through, there was a proposal by liberal members of the Democratic Party to try to cut it by $100 billion. That was rejected. The one headline, of course, for a lot of people is the pay raise 4.6% pay raise for military personnel. That would of course, be the largest pay hike in about 20 years. So that’s a huge one there. And then among the many other amendments that were included in this is one from Virginia Congressman Gerry Connolly, that would ban what’s known as Schedule F that was adopted by former President Trump to give agencies a new class of excepted service. The idea under the previous administration was that it would give agencies more flexibility. A lot of Democrats had some problems with that. So that was actually included and passed within the NDAA. We’ll see what happens when it gets to the Senate. But this would basically go back to what it was before with five exempted services scheduled that had previously been in place. And then one interesting thing related to DC, an amendment that DC Delegate Eleanor Holmes Norton has been trying to get in for a long time, which would give the DC Mayor the power to deploy the National Guard during an emergency. Obviously, that got a lot of attention because of the delays related to the National Guard responding to January 6, so that is included in the big defense bill, but we’ll have to see what happens and whether Senate Republicans as they can lift that language out of the final bill.

Tom Temin  I wonder if Mayor Bowser will get a special red phone right to the National Guard.

Mitchell Miller  She would like one, she’s definitely supportive of this measure. And we’ll see what happens.

Tom Temin  All right. So now of course, as you mentioned, the Senate has to do its thing on the NDAA and they’ve had hearings, they’ve had markups. Are they close?

Mitchell Miller  They are not really very close. As usual. The Senate is kind of running behind the house on this issue. We’ll have to see what happens. They haven’t scheduled a vote yet, but when they do, it’ll probably get approved, obviously, with some changes. And then of course, it goes to conference committee, and that’s where we’ll see whether some of these things stick around or not. But regarding the Senate, the ongoing drama with West Virginia Senator Joe Manchin continues. Late last week, he basically announced that he was going to nix key provisions of what’s been called the scaled back Build Back Better bill. A Capitol Hill colleague of mine has called it the Build Back Never bill because it just does not seem like it’s ever going to get to the finish line. So that complicates a lot of budget matters as well. So Senate again, running behind as often is the case.

Tom Temin  All right. And switching gears here a little bit. There is some gambit by the TSA Administrator, Transportation Security Administration. He wants to get some statutory backing for paying the TSA line agents more money.

Mitchell Miller  That’s right. As you know, there’s been a huge problem with turnover at the TSA. Basically, in an average year Transportation Security Administration says it has about a 20% turnover. So the head of the TSA David Pekoske told the Senate Commerce, Science and Transportation committee last week that he’s committed to pay equity for TSA screeners. He says that they need to get about 10% more screeners. They have been doing a lot of things to try to get retention among TSA workers because of this turnover problem. Pekoske says that the TSA has introduced all kinds of incentives. They’ve got recruiting bonuses, cost of living increases, they’ve even increased bonuses for people during the summer. They’re just trying to fill all these slots. And then all of this is happening as the airlines are struggling to deal with the crowded planes that are out there again now because of different things that have happened related to the pandemic. So a lot of things happening in this federal agency as well as in the aviation industry.

Tom Temin  We’re speaking with WTOP Capitol Hill Correspondent Mitchell Miller. And I was curious, the Best Places to Work in the Federal Government rankings came out last week, and there’s always a lot of hullabaloo about that in the executive branch. Does Congress look at that? And do they take it into account?

Mitchell Miller  They do and lawmakers always look at what some of these agencies are doing or not doing. Some of them as you know, kind of defend the agencies a little bit more than others. And others basically have their blades out and are ready to criticize the agencies and they can use these ratings to kind of build their case one way or the other. I think it is interesting that as you all have reported at Federal News Network that the fact that these numbers have gone down. And it’s probably not all that surprising, given all the uncertainty about what was happening with the pandemic, how much people were going to actually get back into the office, or whether they were going to continue to telework. So I thought it was interesting that, for example, the General Services Administration, even though it slightly went down, it actually went up, basically, because other mid-sized agencies did not do as well. That number for the Federal Trade Commission dropping almost 25 percentage point. That’s got to be a tough one for that agency. But again, a lot of these agencies, as you’ve reported, just still kind of trying to find their way, getting back to where they would normally be. And, as usual, kind of like Alabama and college football, NASA continues to be number one for what, it’s been a decade now.

Tom Temin  Yes, indeed, it has. Well, they’ve got some great telescopes and some great missions ahead.

Mitchell Miller  They got a lot of good publicity last week, that’s for sure.

Tom Temin  All right. And finally, how were things on the back of Capitol Hill where the Supreme Court is. Last summer, and I guess for about a year, we’ve been dealing with Capitol fencing. Now there’s the Supreme Court fencing and people are wondering what the future of that is.

Mitchell Miller  Yeah it’s really interesting, because you have much more visitors coming into the Capitol area complex now. And a lot of people you get are really curious about what’s happening with the Supreme Court fencing, that non-scalable fence that’s been up. Of course, we knew it was going to go up in the weeks ahead of the Roe v Wade decision, and we thought that it would stay up for a little while longer. But now it’s kind of unclear about how long it’s going to stay. And you do get a lot of people from across the country who are coming to visit here will ask you, ‘how long is this going to be up,’ and no one really knows. The other thing that’s interesting too, is, I have noticed this, just because I come into the Capitol every day, the bike racks that sometimes go up when there’s a major event, now seem to be more of a standard fixture around the Capitol. For example, I came in late last week, and there was a news conference taking place outside the House side where they often hold news conferences, and all of it was blocked off. So I think there have definitely been some changes in security protocols. The biking racks are just all the way around the Capitol complex now most of the time, which was not the case, in recent months before this. So we’ll have to see what happens when they get back in the fall or if there’s going to be any change over the summer. You know, when you talk to Capitol police officers, they’re not really sure what’s going to happen. Of course, they’re just following orders and trying to get people to go where they’re supposed to go. But I find it very interesting, the fact that you have so many more people now visiting around the Capitol, and they can still get around the Capitol much closer than they could, obviously after January 6, but there’s still definitely a tighter feel around Capitol Hill now.

Tom Temin  Yeah, that used to be such a nice area to kind of wander around, especially on weekends. And now it’s become sort of a warzone among conflicting protest groups.

Mitchell Miller  Right. There was a time as you know, that people would be surprised when they come in, you know, say, from Kansas, or Ohio or wherever they’re from, and they could get right up to the Capitol steps, basically. And now it takes a little bit more to figure out where they’re going. And then of course, you know, you’re looking at a map if you’re from out of town, and you’re all of a sudden on one side of the Capitol, but you see these either fencing or bike racks and you got to kind of figure out where you’re gonna go. So it’s definitely a different feel around Capitol Hill now.

Tom Temin  Mitchell Miller is Capitol Hill correspondent for WTOP. As always, thanks so much. 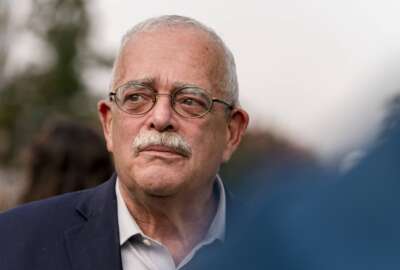