Under the President’s Management Agenda, the Trump administration wants federal employees to match the level of customer service that’s found in the private sector.

But compared to most business sectors, the federal government, as a whole, ranks down toward the bottom of a new customer service scorecard.

In fact, the only industry that federal services outperformed in Forrester Research’s 2018 Customer Experience (CX) Index was internet service providers.

Beyond that, the scorecard ranked TV service providers, airlines,...

Under the President’s Management Agenda, the Trump administration wants federal employees to match the level of customer service that’s found in the private sector.

But compared to most business sectors, the federal government, as a whole, ranks down toward the bottom of a new customer service scorecard.

In fact, the only industry that federal services outperformed in Forrester Research’s 2018 Customer Experience (CX) Index was internet service providers.

Beyond that, the scorecard ranked TV service providers, airlines, rental car companies and health insurers above the level of service provided by federal employees.

Under the scorecard, the National Park Service and the Postal Service remain the highest rated agencies that offer services to the public.

However, the Veterans Affairs Department went up in rank to fourth, and was only one of two government programs to have made a “statistically significant” improvement to their customer service.

Forrester also found that HealthCare.gov also made a significant improvement in its level of service. However, the website still ranks second to last on the scorecard.

However, Parrish pointed out that this is the third consecutive year that HealthCare.gov showed improvement.

“Three years in a row of improvement, that is unique in the federal government and virtually unique anywhere in the economy. That is a big accomplishment,” he said.

The Department of Veterans Affairs will serve as a lead agency for customer experience under the President’s Management Agenda, and will lend a helping hand to 14 other civilian agencies.

But while VA might be the gold standard for customer service, until recently, that wasn’t the case.

In 2014, news reports found that veterans were waiting weeks and months for appointments at the VA medical center in Phoenix, Arizona.

“That was sort of our catalyst to really have a different way of thinking in terms of customer experience, so we kind of had a jumpstart on these ideas and these concepts. We’d had a couple of years to get ourselves together,” Barbara Morton, the VA’s deputy chief veterans experience officer, said in a panel discussion.

Under the PMA, agencies are supposed to have the first iteration of their customer service dashboards up by the first quarter of fiscal 2019.

While the Office of Management and Budget has warned that not all dashboards will be as robust as others, Morton said the dashboards will help establish a baseline of where the government as a whole needs to be.

“I think in terms of other agencies that may or may not be familiar with the concept of customer experience and how truly applicable it actually is, this is a perfect initiative to help bring people along — help them understand and how it fits in, and that frankly, it’s sort of an ‘other duty as assigned.’ It actually needs to be part of what we’re delivering,” she said.

Lee Becker, the chief of staff of the agency’s Veterans Experience Office, said it took VA a while to get better metrics on customer service. But once they did, he said it made transforming veterans care that much easier.

“We had a lot of operational metrics, but we didn’t have really the experience metrics. So we had to build that capacity. We had to build that mechanism of really bringing in the data, the insights from the experience standpoint, and we’ve done that,” Becker said. “We’re pulling in millions and millions of data points directly from the veteran, telling us in real time what’s working and what’s not working.”

Once agencies get to a point where they’re collecting robust customer experience data, Morton advised that they take that preliminary data with a grain of salt.

“The thing that I think initially was very scary for people was the concept of public reporting. But we were in a situation where we were really pushed the edge — we really had to refocus what we were doing and not be afraid of what the numbers were,” she said.

When the VA first started measuring veterans’ level of trust in the agency about three years ago, it found only 47 percent trusted the agency’s level of service. However, Morton said VA has brought that number closer to 70 percent.

“There’s a natural tendency to be fearful of having things be transparent and publicly available, but at the same time, I think the American public, frankly, will appreciate that transparency,” Morton said. 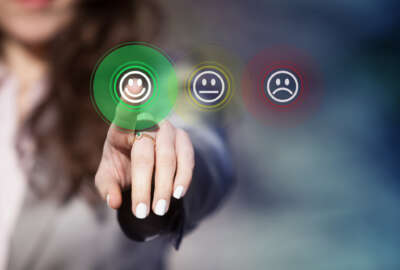