As part of a broader effort that the Pentagon says is designed to ensure that its mix of military members, civilians and contractors reflects more intentional and thoughtful management of a “total force,” the Pentagon is preparing to ask Congress to touch what’s been considered a political...

As part of a broader effort that the Pentagon says is designed to ensure that its mix of military members, civilians and contractors reflects more intentional and thoughtful management of a “total force,” the Pentagon is preparing to ask Congress to touch what’s been considered a political third rail in recent years: letting it conduct contractor-versus-civilian competitions to determine which category of workers is cheaper or more effective for any given task.

An Office of Management and Budget circular (A-76) outlined the basic procedures for performing those types of examinations more 50 years ago, but Congress has imposed a moratorium on them each year for more than a decade.

That’s partly because of bipartisan distaste for the A-76 process, at least as it had been carried out in in the years prior to the initial 2007 moratorium. Constituencies ranging from federal labor unions to the Professional Services Council issued critiques, as did the Government Accountability Office.

But DoD believes it’s long past time for the process to be revived in one form or another, said Thomas Hessel, the Defense Department’s deputy director for total force manpower and resources.

“It was a burdensome and ineffective process in many cases,” he said in an interview for Federal News Radio’s On DoD. “What the department is really interested in is having a revised flexibility that allows us to do a workload analysis and a business case analysis and make the best choices with respect to how we meet our missions, without necessarily having to undergo a very time-consuming and costly four-year process of competing workload, which is a process that oftentimes doesn’t result in the savings that one would have anticipated.”

The department expects to send Congress a formal proposal for a revamped competition process — or at least permission to conduct a limited pilot program — sometime in the next year. Hessel said the drafting of the proposal will take some time, since DoD knows that simply asking Congress to return to the prior A-76 process is a non-starter.

“That would likely not be an effective strategy, because the challenges with A-76 that Congress has identified have not been addressed,” he said. “OMB, because of prior administration focus areas, hasn’t revised that process … so I think it’s safe to say that as part of our workforce rationalization and National Defense Business Operations Plan, pursuing a legislative strategy that will allow us increased flexibility to make well-reasoned choices is the direction the department intends to head in future legislative cycles.”

Although federal unions in particular have tended to think of the A-76 process as a vehicle for outsourcing jobs held by government civilians to private-sector contractors, Hessel insisted that the department has no pre-determined bias as to whether any particular work function should be conducted by civilians or contractors.

Indeed, in response to the administration’s call last year for all agencies to submit detailed plans to reduce their civilian workforces, the Pentagon submitted a “workforce rationalization plan” instead. It asserted that it would be inappropriate for DoD to cut its overall number of government civilians, and that it needed to grow its workforce in at least some targeted areas.

Defense officials repeated that stance last month in a new National Defense Business Operations Plan, the Pentagon’s attempt to align its backoffice functions with the National Defense Strategy it published earlier this year.

“The department’s lethality and readiness are not just a function of our service members,” they wrote in the document, signed by John Gibson, DoD’s chief management officer. “DoD’s civilian workforce is essential to sustaining the viability and capabilities of the all-volunteer force — providing the critical equipment maintenance, base support, logistics and engineering expertise, family programs, and medical care that ensure our soldiers, sailors, airmen, and Marines are ready to deploy, worldwide, and answer the call of our operational commanders. DoD’s civilian workforce is in the business of protecting the American way of life, not regulating or governing it.”

Hessel said the broader thrust of the “rationalization” effort was to give local commanders and HR officials more authority to determine the right mix of uniformed members, civilian workers and contractors for the missions they oversee. The Pentagon, he said, wants those decisions to be made in a decentralized fashion, since each military command and Defense agency has different workforce requirements.

“There’s no predisposition to use a type of labor source,” Hessel said. “And so we’re looking at either increasing the civilian footprint if necessary, if it’s more cost effective than leveraging contract support, while at the same time, recognizing that there are significant opportunities to continue to reform and leverage private sector capabilities.”

In many cases, the Pentagon’s plans will also mean a concerted effort to reduce the number of instances in which military members are doing work that’s deemed to be “commercial” in nature, or that could be done more cheaply or effectively by either civilians or contractors.

“In many, many cases, it is absolutely appropriate for those military personnel to perform those functions if they’re necessary to support career progression, or on a rotational basis to allow for downtime as our military members rotate in and out of theater,” he said.

But in others, local commands are using “borrowed” military manpower to handle tasks that don’t require uniformed personnel. In those cases, the Pentagon would strongly prefer that those service members be reallocated to military-essential functions.

“That would effectively increase the available inventory of existing military end strength to increase unit manning, put more soldiers, sailors, airmen and Marines into training rotations, or into jobs and functions while they rotate around that are more directly contributing to our overall force readiness levels,” Hessel said.

The Pentagon has a long list of policies and procedures that are designed to help command-level workforce managers determine which work functions are military-essential and which ones are not.

But those definitions are continuing to evolve in ways that might, in at least some mission areas, lead to even stronger preferences for civilians over uniformed personnel.

“The traditional definitions of trigger-pullers, warfighters in theater and other determinations that would have caused us to say, ‘We absolutely need uniformed personnel doing this function’ have changed,” he said. “In some areas, we believe we can increasingly leverage the capabilities of civilians and bring in people who aren’t necessarily propensed or eligible to serve in uniform. We’ve actually had a number of studies conducted by federally funded research and development centers — the Institute for Defense Analyses in particular — looking at how we staff cyber operations and how we staff  remotely piloted aircraft operations … in many cases those are examples of where we can increasingly leverage a highly-talented and capable civilian workforce without necessarily subjecting them to the additional duties that our military personnel have, or the rotational requirements.”

Although the rationalization strategy emphasizes the need to devolve decisions to local commanders about whether military personnel, civilian or contractors are the right fit for any particular function, Hessel said the Pentagon also is working on developing tools that will give it a stronger enterprise-level understanding of its overall workforce needs and how its personnel are being employed.

Capturing data about the quantities of people that make up the department’s various workforces and what their job functions are is not the problem. Rather, DoD needs better ways to draw tighter connections between its most vital missions and precisely how it’s allocating its personnel resources to accomplish them.

“What that data allows us is to articulate the alignment of the workforce against those critical readiness and lethality needs, so that we don’t misrepresent the notion that Defense agencies and field activities — the so-called fourth estate — is a purely a bureaucratic or administrative entity,” he said. “Much of it provides critical capabilities that are necessary for the efficacy of the warfighter. So having better granularity, better data, and better methodologies for articulating how our overall force is structured against mission attainment is critical to help with the overall communication of how these entities and workforces contribute to achieving the national defense strategy objectives of Secretary Mattis and the president.” 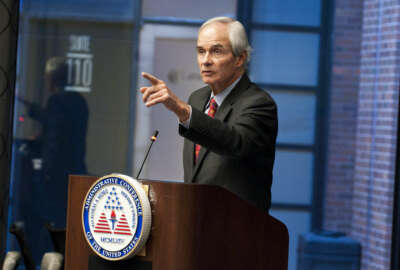