As the search for the next Veterans Affairs secretary continues, two Senate chairmen are calling on the incoming administration to consider their own observations of the VA during the last few years.

Meanwhile, the current VA Secretary, in reflecting on his past two years as the leader of the second largest government agency, says political gridlock, particularly in Congress, has been the most surprising and burdensome challenge during his tenure.

Specifically, Johnson and Grassley urged Trump to expand the provisions in the Veterans Access, Choice and Accountability Act.

“This program has not been implemented according to the letter and intent of the law, making it difficult to use for veterans,” they wrote. “We hope that under new leadership, the VA improves and expands the Choice Program for those veterans who wish to seek care from non-VA providers.”

The senators also pointed to accountability, which has been a contentious issue for Congress in recent years. Johnson and Grassley criticized the VA’s decision to stop using the expedited removal process for senior executives in the VA Choice Act.

Senators encouraged the new administration to return to the original disciplinary procedures included in the law and expand them one step further.

“Moving forward, we encourage the new VA secretary to not only use the tools Congress has already provided the department to hold bad-acting and under-performing VA senior executives accountable, but also work with Congress to enact additional accountability measures for all VA employees.”

Congress introduced several bills this year that would have addressed many of those issues but was unsuccessful in passing consequential legislation.

Instead, the Jeff Miller and Richard Blumenthal Veterans Health Care and Benefits Improvement Act, which President Barack Obama signed into law, made small changes to veterans health care and benefits but didn’t address several of the major controversial issues that VA Secretary Bob McDonald and veterans committees in both chambers of Congress have spent the past year debating.

The 115th Congress will likely need to find a solution to the veterans appeals process,  develop new accountability procedures for VA employees or implement an extension or alternative to the Veterans Choice Program.

McDonald was clearly disappointed that several “must-pass” pieces of legislation never made it to the President’s desk this year.

McDonald said he had a “Pollyanna-ish” wish that the Veterans First Act, which contained the VA’s own proposals for overhauling the sluggish appeals process and pieces of the secretary’s own plan to consolidate community care, would pass.

But the bill from Senate VA Committee Chairman Johnny Isakson (R-Ga.) never made it to the floor. Lawmakers told the VA they wanted to wait until the next Congress to tackle those issues, McDonald said.

Though he showed obvious disappointment that Isakson’s bill, which “included almost everything [the VA] needed,” didn’t pass, McDonald praised the Senate committee’s collaboration.

Johnson and Grassley’s letter comes shortly after a group of 20 veterans associations wrote to Trump and asked that he consider current VA Secretary Bob McDonald as an option for his cabinet. The group, which includes the Wounded Warriors Project and the National Military Family Association, said McDonald’s MyVA transformation is “showing early signs of success.”

“If continued, we believe they have the potential to eventually make VA a model agency,” the veterans organizations wrote. “It is therefore of the utmost importance that you select someone willing and able to continue prioritization of this work.”

Starting over with a completely new leader, they said, would be detrimental to the department.

McDonald is the former CEO and president of Proctor & Gamble, and since joining VA brought several leadership development programs common in the private sector to the department. He’s often spoken of his intent to run VA like a business and transform the agency into a leading customer-service organization.

Yet ideological disagreement, McDonald said, has too often gotten in the way of his ability to change more within the department more quickly.

“I’m not running for anything,” he said. “I don’t want to be anything. I’m happy doing this. I’m happy to retire like I was before.”

Yet Johnson and Grassley’s letter emphasizes priorities where new leadership should focus.

“We are hopeful that under new leadership, the VA can embrace these principles to ensure that our nation’s veterans receive the care they deserve,” the senators wrote. “We look forward to working with the new administration to enact meaningful reforms that improve veteran care, expand veteran choice, hold all VA employees accountable and enhance whistleblower protections.”

McDonald praised the collaboration he’s seen so far between Trump’s transition officials and his own agency leaders. The VA job is one of the last cabinet positions the President-elect hasn’t yet filled. 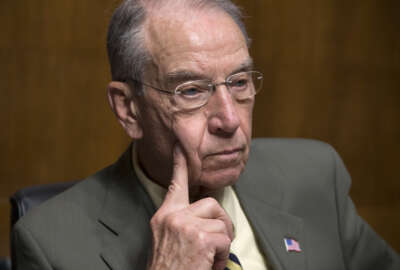