Alan Thomas, who recently left after more than two years as the commissioner of the Federal Acquisition Service at the General Services Administration, has a new job.

Thomas is the new executive vice president of special projects at Trowbridge, an IT services provider with defense, intelligence and civilian agency clients.

In that new role, Thomas will focus on strategic planning and analysis, mergers and acquisitions and best practices for organizational efficiency and effectiveness.

He also signed on as an operating advisor with Enlightenment Capital, which bought Trowbridge earlier this year.

“I’m excited to join the team at Trowbridge delivering transformational IT capabilities that enable defense, intelligence and federal civilian customers to achieve mission success and am equally enthusiastic to work with Enlightenment Capital as a member of their Advisory Board providing support and guidance to their portfolio companies,” Thomas said in an email to Federal News Network.

He left GSA in October after coming to the agency in June 2017. Julie Dunne is the acting FAS commissioner.

During his tenure as FAS commissioner, Thomas oversaw a major transformation of the organization. For instance, FAS went from a $100 million loss at the close of 2017 to ending 2019 in the black with “profit” of $70 million.

The federal marketplace strategy underpinned all of these changes, and Thomas said in September that the goal was to make it easier for GSA’s customers to buy the solutions they need to meet their requirements, to make it less burdensome and simpler for industry partners to provide solutions, and to put the right tools and right processes in place so the acquisition workforce can be more successful in meeting its mission.

This is Thomas’s fourth stint with industry. He also worked for Booz Allen Hamilton, Compusearch, and Data Networks Corp. He started his career as a Presidential Management Fellow supporting the Army’s deputy chief of staff for logistics and has been a program analyst and a program manager for the Office of the Secretary of Defense.

Trowbridge had 13 contracts in place during fiscal 2019 worth more than $300 million with the departments of Defense, Health and Human Services and Labor, according to the USASpending portal. The company holds several multiple award contract vehicles including the CIO-SP3, GSA Schedule 70 and Navy SeaPort Next Generation (NxG). 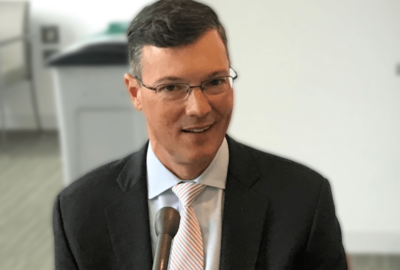 GSA’s Thomas to leave as head of acquisition service

An acquisition system for a new generation