Our guest ran the National Institute of Standards and Technology during the Trump administration. He’s had long experience in research both corporate and governmental. Joining Federal Drive with Tom Temin with what he’s up to now, Dr. Walter Copan.

Tom Temin: Dr. Copan, good to have you on.

Our guest ran the National Institute of Standards and Technology during the Trump administration. He’s had long experience in research both corporate and governmental. Joining Federal Drive with Tom Temin with what he’s up to now, Dr. Walter Copan.

Tom Temin: Dr. Copan, good to have you on.

Dr. Walter Copan: Thank you so much, Tom. It’s a pleasure to join you today.

Tom Temin: And since leaving NIST on January 20, you haven’t been sitting around, you’ve got a new initiative going tell us whom it’s with, which is interesting and where it is and what’s going on?

Dr. Walter Copan: Absolutely. It’s been a pleasure to serve in the administration and to lead NIST. One of the areas of tremendous focus has been on U.S. innovation, on public private partnerships, and what I had called then the return on investment initiative. I worked closely during those years with Andrei Iancu, the head of the U.S. Patent and Trademark Office. Andrei and I have worked very closely on matters of U.S. innovation, intellectual property, and related policy matters. So after the time of our federal service came to an end, we joined up right away with the Center for Strategic and International Studies, CSI, a Washington DC based think tank that has historically focused on national security issues. But now with economic security and innovation issues that are central to U.S. competitiveness, it’s been a great opportunity for Andrei and myself to set up a new project with CSIS, called Renewing American Innovation. It’s a new institute for intellectual property and innovation policy, focusing also on the future of U.S. standards leadership, the issues of the workforce, and the translation of discovery into the marketplace and into the manufacturing sector into the United States. So we’re just kicking that off a series of open forum meetings being held. And we’re very excited about the partnership also with the Center for Strategic and International Studies.

Tom Temin: Yes, because on a variety of domains, basic economic competitiveness, also military superiority, the issue of innovation has been coming up a lot. What initially do you sense are the issues holding back innovation in the United States and commercializing it to a degree that makes a difference?

Dr. Walter Copan: It’s been estimated that about one third of U.S. patents arise from discoveries that are made resulting from publicly funded research. And that includes all the inventions that come from the corporate sector, as well. And so we know that the seed corn of innovation in the United States and around the world, largely derives from federally funded research at the nation’s universities at the nation’s federal laboratory system. And I’ve been privileged to be associated with three of the U.S. federal labs and also on the National Advisory Council, to the Federal Laboratory Consortium. The entire process of translating discovery and capabilities into economic activity has been a focus throughout my career. The journey of intellectual property clarity is something that I worked on very closely within the past administration with Andrei Iancu with his work at the Patent and Trademark Office. The NIST return on investment initiative had a focus on both the role the Bayh-Dole Act plays, as well as the Stevenson-Wydler Act plays in the U.S. innovation system. The focus of that effort included removing acknowledged barriers in many cases or uncertainties about intellectual property, and finding ways of enhancing the efficiencies within the U.S. system to translate technologies to economic activity. More and more, we’re seeing that innovation is driven by the entrepreneurial sector in the United States and around the world. The Bayh-Dole Act has been such a seminal piece of legislation together with Stevenson-Wydler, they both just celebrated their 40th anniversaries in 2020. And they provide the foundation for public private partnerships. In the United States, we don’t necessarily make it very easy for the private sector to partner with federal laboratories. It’s also been very important for our journey of enhancing technology transfer and innovation in the United States to streamline some of the processes and basically get some of the well meaning but out-of-date regulatory matters straightened out and improved, focus on also building a more entrepreneurial research and development workforce, creating better tools to support the discovery of technologies that come from the nation’s universities and federal laboratories. So ultimately, it’s a systemic approach that we took in that effort. The Bayh-Dole Act has been so important for us, but it seems to be under regular attack. There are some that would use, for example, one of the very important provisions within the Bayh-Dole Act, the so-called march-in rights provisions, that’s permits federal agencies to ensure that the technologies that are being licensed from federally funded research actually make their way into the economy to the extent possible, and that companies aren’t licensing technologies and they’re just sitting on them. And so providing greater clarity there around march-in rights where they can be used, streamlining the process, and also emphasizing the importance of U.S. manufacturing, that’s been an essential piece of the Bayh-Dole and Stevenson-Wydler Act. And so part of the work that had been done, it’s still ongoing, a legislative package was submitted to Congress for action as a direct outcome of the return on investment initiative, green paper that was issued in April of 2019. And so we’re excited about that legislation going forward. We’re also excited about some of the other legislative initiatives that are underway that focus on innovation ecosystems across the country, providing greater funding for science and technology, in particular, translational science and technology, the translation, of course, from the laboratory into the marketplace, de-risking technologies. And during the era of the pandemic, we’ve seen just tremendous work by the federal sector, by the universities in the United States and around the world, making their technologies readily available, and ultimately supporting industry, public private partnerships, such as NIIMBL, part of the NIST family of the Manufacturing USA Institute. NIIMBL is the National Institute for Innovation and Manufacturing Biopharmaceuticals. And they have been very busy during this time of the COVID era, helping industry to scale up new technologies, new vaccine production.

Tom Temin: So there’s a lot going on, what will be the output from the activity at CSIS? Policy recommendations, white paper, something you’ll send to the Hill, what will be your producible here?

Dr. Walter Copan: Well, a lot of it is going to be to maintain a national conversation on the importance of innovation, the importance of investment, supporting the initiatives that are already underway for assuring America’s return on investment, shedding light on the importance of the provisions of the legislative modernization of the Stevenson-Wydler Act, part of it will be focused on intellectual property and its foundational role in innovation. Intellectual property, as mentioned already is that seed corn of an idea that then is translatable into something that may create market value. And so their intellectual property policy will focus on patentable subject matter eligibility, and also design patent reform. We’re going to be looking also at the role of the digital economy, the importance of data, artificial intelligence and machine learning, because data sets are now increasingly valuable in the economy. And artificial intelligence is now being used as part of the invention discovery process. And so there’s some very important policy issues that the United States needs to address. And also, we’ll be illuminating some of the well meaning, but counterproductive efforts that are being talked about on Capitol Hill. Some people want to weaken intellectual property rights in the United States, or force companies or institutions to license their technologies to others. And in a lot of ways, the United States has been built upon the principles of property rights, including intellectual property rights to the importance of standardization as well. And so we’ll be having a series of roundtables, issuing white papers and reports, dialogue on Capitol Hill, with members of Congress and with staff to provide additional insight to support effective and intelligent policy decisions.

Tom Temin: I just wanted to ask, you know, having been at NIST for four years now, you did have some federal experience at the National Labs before that, but having run a visible agency that’s part of a big department, what’s your takeaway? Worthwhile? And would you recommend that type of stint to colleagues?

Dr. Walter Copan: Absolutely. The time that I spent at NIST is certainly a highlight in my career. It’s an organization that I have known and love throughout my career journey. Having worked with NIST and having seen the importance of programs such as the manufacturing extension partnership, Manufacturing USA, of course more recently, and the close tie that NIST has with the private sector, very broad range of partnerships, and the role that NIST has also with federal technology transfer policy. It’s also the host institution for the Federal Laboratory Consortium that I mentioned before. It’s just a wonderful opportunity to serve our great country, and to work side by side with some of the most brilliant people on the planet. I think a real focus for the future is to highlight the importance of ongoing investment in science and technology and our science infrastructure in this country. The United States, according to several studies, recently, has fallen to 11th place in a recent study of innovation and competitiveness. And that was part of a regular series that the Bloomberg organization puts out. The United States was previously just a decade ago, in first place globally for innovation. But the slippage of our manufacturing sector in the United States, the reduction of research and development investment by the private sector across many sectors, our increased reliance on manufacturing by overseas partners and the overall outcomes of globalization have been important trends that I’ve been able to track with colleagues at NIST and to work on some of the policy matters. And so the opportunity to serve the nation, to work on policy initiatives that are important for the future of U.S. competitiveness. And it’s been a commitment also that translates even beyond federal service now, the passion for ongoing development in the United States for innovation, competitiveness, manufacturing and supply chain resilience and the opportunity to work with the tremendous colleagues across the entire federal sector. I truly enjoyed working with the Office of Science and Technology Policy and the other leaders of the science agencies, having had the chance to even visit Antarctica together with the National Science Foundation, and see some of the great work that NIST was doing. Sensor development. That’s part of the Polar Research, some of the work on climate analysis, and also the new South Pole Telescope array that that includes some of the sensors that are built by NIST, and its Boulder laboratories in Colorado. What a journey!

Tom Temin: Dr. Walter Copan is the former Under Secretary of Commerce for Standards and Technology, director of NIST, thanks so much for joining me. 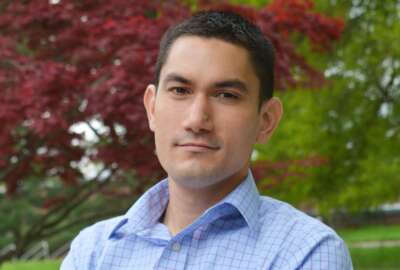