Federal CX gets a booster shot

Given its size, sometime the government can appear a bit incoherent. It actually is. But at least one organizing drive that spans administrations of the last 30 years has had both continuity and money. And it’s had results.

I’m taking about what is today called digital services. It started out named “service to the citizen.” The simple  underlying principal states that when obtaining services or benefits from the government, citizens deserve — because they paid for — excellent service.

Now the Biden administration is running the torch on the next lap for CX. Today’s executive order names a slew of programs for travelers, retirees, disaster victims and veterans. The administration wants them all updated with better digital services. The order seeks to expand things like telehealth and online, paperless confirmation of benefits eligibility for a variety of programs.

The President’s Management Agenda from a couple of weeks ago outlined priorities in a generalized way. This new executive order adds detail to the customer experience “pillar” of the PMA.

It would advance the “no wrong door” concept, a goal that dates at least to the mid 1990s when the government first established web sites. The idea is, whatever citizens want or need from the government, they shouldn’t have to understand and navigate the government’s complicated plumbing.

For government, excellent service today means excellent online service. In the retail industry, big as online has become, in-person shopping can still be a fun and, in a tactile sense, fulfilling experience. I’ll never forget how elaborately the clerk in a Tokyo department store wrapped, boxed and bagged a shirt, handing it to me with the courtesy and detail I’d associated with a tea ceremony. By contrast, what government office in the world would someone choose to visit if they didn’t have to?

To its credit, the Biden administration has already been putting its money toward its digital service goal. That came through in my interview with Dave Zvenyach, director of the General Services Administration’s Technology Transformation Service. The TTS has distributed $150 million it got from the American Rescue Plan to agencies working on 14 projects to modernize digital services.

One ongoing project is GSA’s own USA.gov web site. USA.gov was always intended as the government’s main portal. It is, but as industry has shown, you need to keep up with constantly improving technology and updated customer expectations. Today’s White House order cites USA.gov as the digital federal front door, but the work is already underway.

“The public doesn’t need to really understand the nuances and the intricacies of how government works. They just expect service delivery to happen and expect it to happen in a way that makes sense to the public,” Zvenyach said.

I was glad to see the EO acknowledge that sometimes, even in the digital world, you need to talk to somebody. The administration wants the IRS to offer a service that’s that’s become popular in the commercial world. Namely, letting people schedule call-backs to answer tricky questions.

Other initiatives seem more, let’s say, aspirational. Case in point: Shorter airport screening times thanks to new technologies. But the ambitiousness of the EO sets the right tone to add oomph to many initiatives already in progress. They’re projects agency executives know they have to get done. 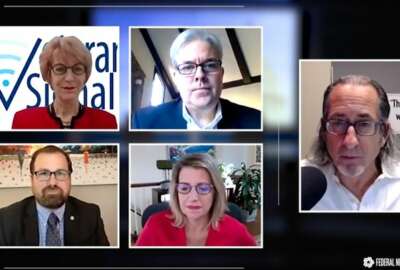