The American Federation of Government Employees is suing the federal government for failing to provide hazardous duty pay to employees who have been potentially exposed to the coronavirus.

These employees work at the Bureau of Prisons, Department of...

The American Federation of Government Employees is suing the federal government for failing to provide hazardous duty pay to employees who have been potentially exposed to the coronavirus.

These employees work at the Bureau of Prisons, Department of Veterans Affairs and the Agriculture Department.

But other federal employees who believe they too have been exposed to hazardous working conditions during the coronavirus pandemic can sign up to join the class action lawsuit.

The lawsuit, which AFGE and KCNF filed in the U.S. Court of Federal Claims, seeks back pay, plus interest and any associated attorney fees, for all class-action plaintiffs who were potentially exposed to the coronavirus at work without the proper protective gear from Jan. 27 through the present.

General Schedule employees who have performed work with or in close proximity to objects, surfaces and individuals infected with the coronavirus are due a 25% hazardous duty pay differential, the lawsuit argues.

In contrast, wage-grade employees are due an 8% environmental pay differential, AFGE and KCNF said.

Three of the named plaintiffs on the case work at the Federal Correctional Complex in Oakdale, Louisiana. Nine inmates and seven Bureau of Prisons employees there have tested positive for the coronavirus as of Sunday, AFGE said. An additional 68 inmates are in quarantine.

One of the BOP plaintiffs, Aubrey Melder, worked in close proximity to the coronavirus when he transported an infected inmate and supervised that inmate at the hospital, according to the lawsuit.

“With the exception of gloves that Plaintiff Melder wore on or about March 19, 2020 and the limited personal protective gear the outside hospital personnel provided to him after he had spent a significant amount of time with the inmate,” the lawsuit reads.

According to the union, the Louisiana federal prison was slow to respond to a local outbreak of the coronavirus and didn’t lock down the inmates there until March 29.

“Federal prisons are already dangerously understaffed, and now they are a petri dish for COVID-19,” Heidi Burakiewicz, a partner at KCNF, said Monday in a statement. “Yet, tens of thousands of Bureau of Prisons employees are still showing up to do their job every day. Department of Veterans Affairs employees, including janitorial and maintenance staff, have also been working for weeks in facilities where there have been documented cases of COVID-19. All of these men and women, and many others working in jobs across the federal government, have met the legal standards outlined in Title 5 and the government needs to give them their hazard pay differential.”

Determining exactly who has been exposed to the virus at work and the length of the exposure for each employee will likely be a daunting task. The plaintiffs acknowledged as much in their lawsuit but said agency employment records should help them determine the details.

Both AFGE and KCNF were the plaintiffs behind a 2013 class-action lawsuit filed in the same court, where they argued the government had violated the Fair Labor Standards Act during a recent government shutdown.

The court ruled in favor of AFGE back in 2017, ordering agencies to compensate tens of thousands of employees with twice the back pay they had already received, plus overtime.

But it’s taken months for attorneys and agencies to determine exactly how many employees were eligible for those damages. Today, lawyers are still arguing over precisely how much money 21,781 employees are owed.

AFGE and Burakiewicz have also filed a similar class-action lawsuit over the 2018-2019 shutdown. That case is still awaiting a decision in the Court of Federal Claims. 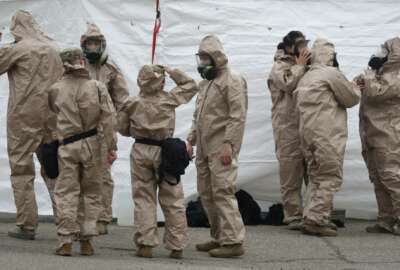