That’s because Democrats say they still don’t have much information about the Trump administration’s proposed reorganization of OPM. They’re looking to Dale Cabaniss, the president’s third nominee in less than three years...

That’s because Democrats say they still don’t have much information about the Trump administration’s proposed reorganization of OPM. They’re looking to Dale Cabaniss, the president’s third nominee in less than three years to be OPM director, as a potential source for information.

“The people, policies and programs at OPM have to continue,” Cabaniss said of Trump administration’s reorganization proposal during Tuesday’s nomination hearing. “It doesn’t matter where they sit. Those things are critical, and they’re critical to the functioning of government.”

If confirmed, Cabaniss would replace Margaret Weichert, who has been serving as OPM’s acting director and the full-time deputy director for management at the Office of Management and Budget since last October. Weichert replaced Jeff Pon, who left the agency after just seven months as permanent director and whose departure came as a surprise to many OPM employees.

Sen. Gary Peters (D-Mich.), the committee’s ranking member, said he and his colleagues have repeatedly asked for more details about the reorganization, including a justification for the proposal, an implementation plan, a timeline and an analysis about the impact on the federal workforce.

“We have yet to see any of [this],” he said. “I am disappointed by the administration’s lack of transparency about this proposal. In order to work together to achieve our shared goal, we must build a shared understanding of what the facts are. Ms. Cabaniss, if you are confirmed you’ll be leading an agency facing sweeping changes, significant uncertainty and a need to rebuild trust with Congress.”

Citing her experience as the former staff director for the Senate Appropriations Financial Services and General Government Subcommittee — and her earlier experience on the very committee tasked with advancing her nomination — Cabaniss agreed Congress needed more information about the reorganization.

“I totally agree with you,” she said. “Absolutely, from sitting on the other side, I know that you have to get all the information that you need to best understand it. Particularly since as I read the [President’s] Management Agenda, it envisions the need for legislation. The only way to get legislation to be able to effectuate this change be would to work with Congress.”

Since Cabaniss isn’t the confirmed OPM director yet, she hasn’t been involved in the planning and preparation for the reorg just yet. Congress then focused its questions on whether she would be transparent about the reorganization — and the legitimacy of the administration’s proposal.

At least four Democratic senators said they had concerns about the OPM reorganization. No Republicans asked about the proposal, and few members had questions for Michael Wooten, the President’s nominee to be the director of the Office of Federal Procurement Policy.

But Cabaniss said all the right things. She agreed, for example, that collective bargaining is in the public interest.

“Will you unequivocally commit to support federal employees and their right to organize despite the efforts of the current administration if you are confirmed?” Sen. Maggie Hassan (D-N.H.) asked.

“Yes, senator, I will follow the statute,” Cabaniss said.

Shortening and improving the federal hiring process is a top priority, said Cabaniss, who added that the federal workforce’s inability to hire young talent was one of her biggest concerns. She also recommended a bottom-up review of USAJobs.gov and the retirement processing system, which have long been frustrations for Congress.

Beyond her congressional experience, Cabaniss also served as chairwoman of the Federal Labor Relations Authority during the George W. Bush administration. During her tenure, the FLRA ranked last among small agencies in the annual “Best Places to Work in the Federal Government” rankings.

It’s a point that the American Federation of Government Employees had made in a recent letter to the committee, which urged members not to support Cabaniss’ nomination.

“You’re right,” Cabaniss said when asked about FLRA’s employee engagement scores. “It was an issue, and I understand that morale was not necessarily great, but there were also external forces that were threats to the agency at the time.”

Cabaniss referenced the Department of Homeland Security, which she said had questioned whether collective bargaining was consistent with national security after 9/11, and the Defense Department’s consideration of its own personnel system.

Tight budget constraints also forced Cabaniss to make changes to human capital and procurement during her tenure, she added.

“At the same time we were making internal changes, there were threats to the agency that probably would have cost about 60 percent of its jurisdiction,” she said. “I understand that there were concerns about the future of the agency as people had to come to know it, but there was not really anything that I could do that Congress wasn’t going to make these changes.”

Cabaniss also said she had learned from her FLRA experience about communicating with employees about potential changes. It’s a lesson that if confirmed, she’d likely confront at OPM.

“Change is a constant in our world today,” she said. “We have to figure out a way to communicate more with our employees to help them manage the anxiety and the valid feelings that come about with that change and try to provide as much information as possible, knowing that we’re not going to be able to promise that the world’s not going to change — but do what we can so people feel like they have enough information that they can make an informed decision about what they want to do.” 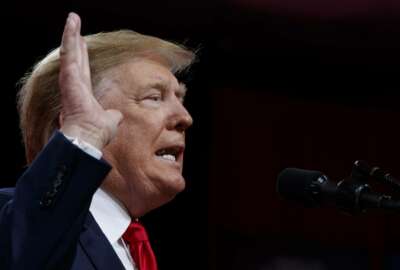