This story was updated on Tuesday, July 28, at 8 a.m. to reflect details about the Senate Republicans’ latest coronavirus relief proposal, which includes $1.2 billion in loan authority to cover existing revenue shortfalls at U.S. Citizenship and Immigration Services.

U.S. Citizenship and Immigration Services has bought itself more time as it attempts to avoid furloughs for nearly three-quarters of its workforce.

The agency told employees Friday it would delay the possibility of furloughs until...

This story was updated on Tuesday, July 28, at 8 a.m. to reflect details about the Senate Republicans’ latest coronavirus relief proposal, which includes $1.2 billion in loan authority to cover existing revenue shortfalls at U.S. Citizenship and Immigration Services.

U.S. Citizenship and Immigration Services has bought itself more time as it attempts to avoid furloughs for nearly three-quarters of its workforce.

The agency told employees Friday it would delay the possibility of furloughs until the end of August.

USCIS was originally set to furlough some 13,400 employees on Aug. 3 — unless Congress came through with emergency funding. The furloughs were expected to last anywhere between 30-to-90 days, though the agency acknowledged they could last longer.

“Recent assurances from Congress, and an uptick in application and petition receipts, have allowed USCIS senior leadership the flexibility to responsibly delay the start date of the administrative furlough of approximately 13,400 USCIS employees until Aug. 30,” Jessica Collins, an agency spokeswoman, said in a statement to Federal News Network. “This delay is intended to allow Congress enough time to act and provide USCIS with the funding needed in order to avert the administrative furlough all together.”

Employees will receive another notice informing them of the new possible furlough date before July 30, a USCIS spokesman said. Federal agencies are required by law to give employees 30 days of advance notice in writing before the expected date of a furlough.

USCIS is a fee-for-service organization, meaning it relies on the revenue it collects through work like visitor petitions and citizenship applications, for example, to keep the organization running.

Throughout the pandemic, the agency has said it hasn’t been able to collect enough fees from immigration examinations, and it projected a 61% drop in application and petition requests through the end of the fiscal year. Though USCIS has limited salary increases and taken other steps to keep its expenses low, the agency said it needed to take “drastic action” to keep the organization afloat.

Despite USCIS’ recent uptick in revenue, the agency is standing by its original request to Congress for an additional $1.2 billion in emergency funding, plus authorization to add a 10% surcharge on its application fees.

The surcharge would allow USCIS to eventually “pay back” the emergency funding it received from Congress, the agency has said.

“USCIS’ funding request of $1.2 billion remains unchanged and the agency is depending on Congress to provide emergency funding to ensure agency operations continue uninterrupted,” Collins said.

Members of Congress, however, have questioned USCIS’ projections about its funding. Senate Appropriations Committee Chairman Patrick Leahy (D-Vt.) said the agency projected it would end the fiscal year with a budget surplus.

The agency said it must have enough funds on hand on Sept. 30 to carry over into the beginning of the next fiscal year to begin and maintain operations.

“With regard to your projected deficit for fiscal 2021, we are committed to addressing this issue in the next coronavirus supplemental so that USCIS can continue accomplishing its missions without a furlough,” Leahy and Jon Tester (D-Mont.), ranking member of the Senate Appropriations Homeland Security Subcommittee, said in a July 21 letter.

Both Maryland Sens. Ben Cardin and Chris Van Hollen have also questioned whether the pandemic and the agency’s inability to collect fees and generate revenue were the real root causes behind USCIS’ financial challenges — or whether the administration’s immigration policies were to blame.

“The day-to-day mission of the USCIS is too important for mass furloughs to replace prudent planning and collaboration with Congress on the agency’s challenges,” Cardin said Friday in a statement. “I am encouraged by the USCIS decision to postpone the furloughs it had previously announced and look forward to working with its leaders to establish a viable, long-range strategy to ensure stability for the agency and its workers alike.”

The American Federation of Government Employees, which represents 14,500 USCIS employees, said it too was encouraged by the furlough delay but urged Congress to a find more permanent funding solution.

AFGE said last month it was confident Congress understood the risks of furloughing the majority of the USCIS workforce. The union was hopeful lawmakers would include emergency funding in upcoming coronavirus legislation.

Reps. Jeff Fortenberry (R-Neb.) and Emanuel Cleaver (D-Mo.) also introduced standalone legislation earlier this month which would give USCIS the funding it said it needs.

“While this delay is a step in the right direction, more must be done to protect the jobs of these essential employees,” Everett Kelley, AFGE national president, said in a statement. “We hope this delay will allow time for Congress to pass emergency funding legislation to prevent these furloughs from ever taking place. Congress and U.S. Citizenship and Immigration must address this issue once and for all so we do not find ourselves in this position again.” 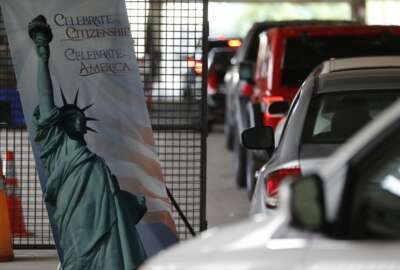