Civilian agencies are largely spared from the deep cuts the White House originally offered as a way to offset an $18 billion proposal for more military spending and additional funds to pay for President Donald Trump’s wall along the southern border.

Yet the White House says it still sees the $1 trillion spending bill for fiscal 2017, which members of Congress agreed to after weeks of negotiations, as a win.

Civilian agencies are largely spared from the deep cuts the White House originally offered as a way to offset an $18 billion proposal for more military spending and additional funds to pay for President Donald Trump’s wall along the southern border.

Yet the White House says it still sees the $1 trillion spending bill for fiscal 2017, which members of Congress agreed to after weeks of negotiations, as a win.

“We’re talking about 2017 funding,” White House Press Secretary Sean Spicer said during a May 1 briefing. “This is something that most presidents would walk into office and that would have been done. Because the last Congress didn’t do this under President Obama, we have an opportunity to get some of the President’s priorities infused in the last five months of 2017. That’s a big step forward.”

The 2017 measure does not break the spending caps set under the Budget Control Act.

Congress is expected to vote on the bill later this week and send it to the President’s desk in time to avoid a government shutdown before Friday.

Federal News Radio combed through the budget for the remaining five months of fiscal 2017 and found seven areas that may interest civilian agency employees.

The White House requested an additional $3 billion for the Homeland Security Department, which would begin to pay for the President’s executive orders on border security and immigration enforcement during the remaining five months of the fiscal year. Yet the fiscal 2017 budget falls short of that request.

Congress has appropriated about half of what Trump originally requested — roughly $1.5 billion for “enhanced border security” efforts in fiscal 2017.

The Trump administration decided last week that it would not push for “bricks and mortar” funding for the border wall. Instead, the additional $1.5 billion will go toward maintenance, infrastructure and technology for the existing wall along the southern border, Office of Management and Budget Director Mick Mulvaney said during a May 1 briefing.

“This is only a five month plan,” he said. “Once we looked our hands over we realized it was almost impossible, if not impossible, to actually get bricks and mortar on the ground in five months, so why start fighting about it now? Let’s focus on things we can do in this fiscal year.”

Customs and Border Protection and Immigration and Customs Enforcement will each receive relatively large boosts to their budget, relative to what each agency received in 2016.

Yet many components and offices in DHS, such as the Office of the Secretary and the Federal Emergency Management Agency, will see funding reductions due to “projected under execution of proposed FTE [full time equivalents].”

The Secret Service will get a big boost to its budget, part of which includes a $13 million increase for additional overtime pay for agents, $8 million for retention efforts and $28.5 million for more agent relocation costs. It will receive $34 million for “increased physical presidential and other security requirements.”

The Coast Guard will get an additional $4.5 million to add more staff to its Cyber Command and to establish an official Cyber Protection Team and enhance the agency’s capabilities.

“To help address the need to retain and hire personnel with the requisite cybersecurity skills, however, the total includes all funding requested for special cyber pay and bonuses.

DHS’ headquarters consolidation project will receive significantly less this year than in previous years. DHS will get about $13.3 million in 2017, $202 million less than in 2016. It’s not the first time the St. Elizabeths consolidation project has fallen short on appropriations, but some senators have warned in the past that the project could fall behind schedule without sustained funding from Congress.

For the first time, the majority of the Homeland Security Department’s budget has been restructured into four common account categories to coincide with the department’s recent efforts to simplify and streamline its budgeting activities among 22 component agencies.

The budget also directs DHS to continue its work with each component on hiring processes and metrics. It wants the department to brief the appropriate congressional committees on its strategy to decrease the number of days it takes to hire new talent. CBP and ICE each have specific authorities in the budget to report on their progress in more quickly attracting and hiring border patrol agents and immigration officers, a process that’s long been cumbersome and frustrating for both components in the past.

The EPA gets about $208 million less than the $8.2 billion it asked for in fiscal 2017 as part of the appropriations bill.

The bill directs the agency to submit an operating plan for 2017 within a month after the bill becomes law.

EPA is also required to stay within the $1 million limit for reprogramming funds.

“It is noted that such reprogramming directives apply to proposed reorganizations, workforce restructure, reshaping, transfer of functions, or downsizing, especially those of significant national or regional importance, and include closures, consolidations, and relocations of offices, facilities and laboratories,” supporting appropriations documents stated. “Further, the agency may not use any amount of de-obligated funds to initiate a new program, office or initiative, without the prior approval of the committees.”

The bill also notes that EPA’s current workforce is below fiscal 2016 levels. The legislation includes a note to factor in rescissions — legislation repealing a previous law laying out Congress’ authority to spend a certain amount of money — to the science and technology programs, and environmental programs and management.

Those amount to about $90.3 million according to the final bill.

For science and technology programs, the bill provides $706 million, while environmental programs and management gets about $2.6 billion.

It provides the IRS with $2.2 billion for taxpayer services. Of that amount, at least $206 million must be spent on operating expenses, including $5 million for identity theft casework.

To help address enforcement issues, the bill provides $4.9 billion for enforcement purposes. IRS Commissioner John Koskinen said during a speech in Washington in early April that the agency has lost 17,000 net employees in the past six or seven years, and about 7,000 of them were “key enforcement personnel.”

This latest appropriation bill specifies that $290 million should be used only for “measurable improvements in the customer service representative level of service rate, to improve the identification and prevention of refund fraud and identity theft, and to enhance cybersecurity to safeguard taxpayer data.”

The appropriations bill directs the IRS to make funds available for “improved facilities and increased staffing to provide sufficient and effective 1–800 help line services for taxpayers.”

The appropriations bill includes tens of millions of dollars for cybersecurity and information technology, across a variety of agencies and missions.

The office of the federal chief information officer gets nearly $50 million under the bill, of which $33 million is for cybersecurity.

The Treasury Department’s cybersecurity enhancement account stands to get $47.7 million if the spending bill passes.

The Defense Department receives about $1.5 billion for cybersecurity training just across areas of base support, specialized skill training and professional development education — not including other cyber areas like missile and rocket technology, or space and missile defense assets.

“The agreement fully funds the fiscal year 2017 base budget requirement of $6.7 billion for the Army, Navy, Marine Corps, Air Force and the defense agencies cyberspace activities, an increase of $992 million over the fiscal year 2016 enacted level,” documents stated. “While the service and defense-wide budget justification material, as well as the Department of Defense classified cyberspace activities information technology investments budget justification materials, provide some level of detail, much of the funding is encompassed within larger programs and funding lines, which limits visibility and congressional oversight of requested funding for cyberspace activities specifically.”

The Energy Department will see an extra $20 million to help with its IT and cybersecurity goals.

At the Homeland Security Department, $286 million is provided for the office of the chief information officer, which includes a $2.1 million cut to legacy information technology services.

The Transportation Department’s cybersecurity initiatives would be funded by $15 million, a $7 million boost over 2016 enacted numbers.

The Office of Personnel Management will see a budget boost in fiscal 2017. The agency will receive $289.2 million, an increase of $17.1 million from the previous year’s budget.

The agency will also receive $11 million to strengthen OPM’s legacy and Shell environment IT systems and “the modernization, migration and testing of such systems.” OPM must submit reports to Congress detailing the full scope and cost of this IT project, and the agency’s inspector general must review the business case and comment on it.

The Federal Citizen Services Fund  — which GSA  has used to fund the Office of Citizen Services and Innovative Technologies (OCSIT) and now is folded into the Technology Transformation Service (TTS)— receives $55 million under the bill; the same amount of funding as 2016. The fund is the middle man between agencies and members of the public who are trying to obtain information or access public services through a variety of media.

GSA is also directed in the spending bill to spend not less than $2 million on the Unified Shares Services Management Office, out of its $60 million proposed appropriations for the Office of Governmentwide Policy.

The department is known as the government’s landlord, and under the appropriation bill, the department’s Federal Buildings Fund [not counting rental income to fund] receives $8.8 billion, down about $1.4 billion from the 2016 enacted budget.

Within the appropriations bill is $200 million for the FBI headquarters consolidation project — plus $323 million under the FBI’s appropriations — which was not the news all lawmakers wanted to hear.

Rep. Steny Hoyer (D-Md.) in a tweet said he was “disappointed the project wasn’t fully funded.”

Fully funding the new, consolidated FBI HQ is a matter of national security.

The project is proposed to cost more than $1 billion, and in March GSA announced it was putting a hold on the consolidation until Congress funded the project.

“It is the intent of Congress to provide funding in fiscal year 2018 necessary for the project to proceed expeditiously,” according to spending bill supporting documents.

Similar to last year’s spending bill, the appropriations legislation includes a line for the GSA’s buildings fund, that preference will be given when it comes to consolidation activities, for projects “that achieve a utilization rate of 130 usable square feet or less per person for office space.”

The White House had slated many cuts to foreign aid, assistance, research and grant programs at the State Department and the U.S. Agency for International Development in its 2017 budget amendment.

Those agencies see reductions in some places and boosts in other areas.

“The act does not include funding for any new, non-security positions, unless specifically noted herein,” the budget said of State’s Administration of Foreign Affairs. “The Secretary of State may fill existing positions that become vacant due to attrition, as needed.”

Diplomatic and consular programs will receive an additional $524.3 million this year, and educational and cultural exchange programs will get $43 million more in 2017 compared to the previous year’s levels.

Yet embassy security and construction projects, for example, will see a $356 million reduction.

Congress wants both State and USAID to inform appropriations committees of their plans to restructure funding and staff, a potential sign of future workforce and budget reductions to come. 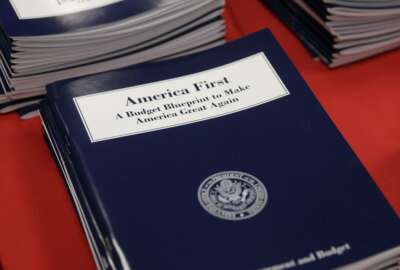