House Armed Service Committee claims Esper, Milley refused request to testify on protest operations
Thirty Democratic members of the House Armed Services Committee said the Defense Department’s top civilian and military leader are avoiding accountability by declining to testify about the military’s role in recent protests. The Pentagon says that’s not true — but it’s also not saying when officials will appear on the Hill.

Rep. Adam Smith, the committee’s chairman has been calling...

Thirty Democratic members of the House Armed Services Committee said the Defense Department’s top civilian and military leader are avoiding accountability by declining to testify about the military’s role in recent protests. The Pentagon says that’s not true — but it’s also not saying when officials will appear on the Hill.

Rep. Adam Smith, the committee’s chairman has been calling for Defense Secretary Mark Esper and Joint Chiefs Chairman Mark Milley to testify this week since at least last Tuesday. But according to Smith and his HASC majority colleagues, those requests have been rebuffed.

The members said they were willing to make do with an informal briefing until Esper and Milley testify in open session. Such a briefing, with Army Secretary Ryan McCarthy, had been scheduled for Friday, but was cancelled.

The Pentagon, for its part, denies that Esper and Milley have refused to testify.

“The DoD legislative affairs team remains in discussion with the HASC on this request,” Pentagon spokesman Jonathan Hoffman said in a statement to CNN this weekend. “In the meantime, DoD has committed to provide Army Secretary McCarthy, Army Chief of Staff Gen. McConville, and D.C. National Guard Commanding General Maj. Gen. Walker to brief the committee next week on the presence of the National Guard in Washington, D.C. this past week.”

But the committee has made clear it wants to query DoD leaders on matters that extend well beyond the military presence in the District of Columbia. Members say they also want answers on more general questions about what role military forces should play in domestic law enforcement, whether active duty forces have been deployed in any domestic location so far, and why active duty forces were deployed to staging areas outside the nation’s capital.

HASC leaders now say they want at least an informal briefing by the end of today. —JS

A Space National Guard could cost between $120 million to $1.4 billion depending on how the Space Force would tackle the organization.

A report from the Congressional Budget Office says a proposal to transfer 1,500 existing National Guard personnel to the Space National Guard would cost about $100 million, plus about $20 million for the construction of new facilities.

A much more expensive option would be to create a Space Guard about one third of the size of the Space Force — estimated to be about 16,000 people.

“Under that approach, the Space National Guard would consist of 4,900 to 5,800 personnel. CBO estimates that the Defense Department would incur $385 million to $490 million in additional costs annually to operate and support this larger Space National Guard,” the authors of the report state. “Creation of this larger force also would probably result in onetime costs of $400 million to $900 million for constructing additional facilities and equipping the new units.”

The study also raising a few policy issues lawmakers may have to grapple with. For instance, will the Space Force have a reserve component that operates at a federal level and, if so, how would local and national missions be separated in a domain like space? — SM

It’s been more than four years since Congress ordered the Defense Department to evaluate the cybersecurity of all of its major weapons systems. So far, things aren’t going great.

According to statistics the Government Accountability Office published last week in its annual assessment of DoD’s major acquisitions, the Pentagon had only conducted those evaluations on four weapons systems before the law’s Dec. 31, 2019, deadline. Three of them are managed by the Navy, and one is managed by the Office of the Secretary of Defense.

The law – part of the 2016 National Defense Authorization Act – didn’t precisely define what constituted a “major weapons system,” so DoD was allowed to decide which ones the requirement applied to. The Pentagon determined it applied to 19 programs. Nonetheless, 15 of them were never done, or missed the deadline.

The evaluations called for in the law are only one of the ways to test a weapons system’s cybersecurity, and GAO said DoD is doing better on other metrics. 28 out of 42 programs have undergone different types of reviews, called “cybersecurity assessments.”

The National Taxpayers Union (NTU) said the Defense Department and Congress are addicted to the easy money the Overseas Contingency Operations (OCO) fund can provide and it’s proposing a rehab.

Congress authorized $2 trillion into the fund and its looser regulated predecessor since 2001. But OCO is no longer being used to fund the War on Terror and is rather being used as a way to beef base funding, NTU contends.

The group offers short- and long-term solutions to kicking the OCO habit. Some short-term recommendations include reestablishing the Wartime Contracting Commission to finding waste fraud and abuse in wartime contracts. Another recommendation is to require five-year projections of OCO costs to lend more predictability to the budget.

Long-term options include actually enforcing the definition of OCO and using it only for actual war operations. Another idea is to put more aggressive caps on OCO funding with a declining cap over time until Congress and DoD are weaned off. — SM

As the Pentagon gradually relaxes the restrictions it had placed on military members’ permanent change of station (PCS) moves, DoD’s system for transporting their household goods is likely to be stretched to the breaking point. Moves that were supposed to have happened in the spring will now get piled into what’s already the busiest PCS season of any given year.

To help relieve that pressure, DoD is raising its reimbursement rates for members who hire their own movers – or who move themselves DIY-style. Through the end of the year, the military services will pay them 100% of what the government would have paid to use its own contracted movers, no matter how much the do-it-yourself move actually cost the member.

The update to the Joint Travel Regulation took effect on June 1. Before that, the reimbursement rate was set at 95% of DoD’s costs.

“Industry may face challenges to support this huge increase during the summer season,” Derrick Candler, the chief of the Army’s transportation policy division said in a release. “This initiative can help increase the number of moves to ensure our people can get to their next duty station as quickly as possible. This will have positive effects on the entire Army and DoD. The PPM also reduces the strain on families and moving companies.”

Historically, the “personally-procured move” option has been more popular among single service members, or married couples without children. —JS

One of the biggest federal employee unions is asking the House Armed Services Committee to consider 12 proposals for the 2021 National Defense Authorization Act. The American Federal of Government Employees is specifically asking the committee to preserve Defense Department employees’ right to collective bargaining. That proposal stems from a January memo giving the defense secretary the authority to exclude DoD civilian employees from the Federal Service Labor-Management Relations statue, which allows unions to bargain with agencies on behalf of federal workers.

Other asks on the list include expanding federal employee paid leave benefits.

Another proposal asks the committee to support the correction of the “overly broad” definition of commercial items.

“The department has stated that the ‘commercial item’ definitions and treatment have generated excessive cost growth and readiness problems,” according to the letter.

DoD’s own legislative proposals for the NDAA request improved access to cost and price information and access to technical data needed to maintain weapons systems in order to correct the issue. — SM

A different kind of protest

A member of the Defense Science Board resigned after seeing  police and National Guard clear out peaceful protesters for a presidential photo-op last Monday. The protesters were gathered to speak out against police brutality of black people.

Miller also called out Defense Secretary Mark Esper asking him where he draws the line for violations to the Constitution.

“I urge you to consider closely both your future actions and your future words. For example, some could interpret literally your suggestion to the nation’s governors Monday that they need to ‘dominate the battlespace,’” Miller wrote. “I cannot believe that you see the United States as a ‘battlespace,’ or that you believe our citizens must be ‘dominated.’ Such language sends an extremely dangerous signal.” — SM 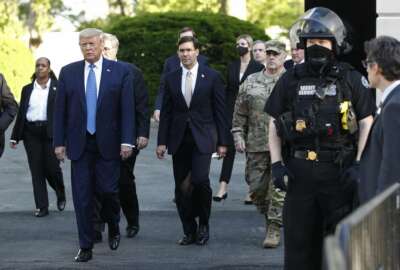