After a year of proposed pay freezes, executive orders and a historic government shutdown, the National Treasury Employees Union is choosing to look on the bright side, even if its members suffered a few battle scars along the way.

After all, a federal district judge overturned nine key provisions of the President’s executive orders on collective bargaining...

After a year of proposed pay freezes, executive orders and a historic government shutdown, the National Treasury Employees Union is choosing to look on the bright side, even if its members suffered a few battle scars along the way.

After all, a federal district judge overturned nine key provisions of the President’s executive orders on collective bargaining and official time.

Lawmakers secured back pay for federal employees during this most recent government shutdown — and all future ones.

And the courts are moving forward with two of NTEU’s recently-filed lawsuits that challenge the 35-day government shutdown.

About 10,000 federal employees who are part of NTEU’s bargaining units have so far opted into the union’s class-action lawsuit, which argued the administration violated the Fair Labor Standards Act when it forced excepted federal employees to work without pay during the shutdown.

NTEU is pleased that with uptake so far from its collective bargaining members, considering some 25,000 federal employees joined a similar class action lawsuit following the 2013 government shutdown.

A judge is considering a motion to consolidate NTEU’s case with about a dozen other similar ones, Paras Shah, NTEU’s assistant counsel, told reporters Wednesday. Most notably, the law firm Kalijarvi, Chuzi, Newman and Fitch has filed a similar suit on behalf of the American Federation of Government Employees.

The government and unions are working with an outside consultant to calculate the amount of liquidated damages that federal employee plaintiffs are owed. Shah said all parties are still sorting through mountains of payroll data.

“There’s still some pay data to be obtained from agencies,” he said. “The government has told plaintiffs counsel in that case that after the damages are calculated that it intends to appeal the Court of Federal Claims ruling to the federal circuit.”

NTEU, meanwhile, is still pursuing its second shutdown lawsuit, which it filed in the U.S. District Court for the District of Columbia during the recent lapse in appropriations.

The union’s second lawsuit raises a variety of constitutional questions that challenges the Antideficiency Act, the mechanism that ultimately prompts agencies to shut down, furlough some and force other federal employees to work without pay for the duration of a lapse of appropriations.

“I wanted to do everything in my power to find an avenue to bring shutdowns to an end,” Tony Reardon, NTEU’s national president, told reporters. “If you don’t have the appropriation in place to pay employees, then they don’t work. My bet is that Congress is going to do what they have to do to make sure that there are appropriations in place to make sure that we do not have shutdowns.”

Meanwhile, NTEU is encouraging its members to build off the momentum they earned during the recent shutdown to educate and engage members of Congress about their work.

Still, many of the challenges NTEU faced over the past year will likely resurface again.

The Trump administration is appealing the federal judge’s decision on the President’s executive orders.

And while federal employees are still waiting for the 2019 pay raise, Reardon said he has a feeling the White House won’t shy away from another proposed pay freeze for the following year.

“I’m concerned that we’re going to see much of the same,” he said of the president’s 2020 budget proposal.

The president’s 2019 budget proposal suggested a pay freeze and a familiar series of cuts for current and future retirees and federal employees.

The White House is expected to release its “skinny” budget proposal early next week.

NTEU is also preparing for the prospect of more proposed cuts to agency budgets. Preserving the Office of Personnel Management from a proposed reorganization, for example, is another priority for the union.

“I’ll be the first to tell you, OPM does have some faults,” Reardon said. “But that said, it’s an independent agency that shields our workforce from direct political control, and that must be maintained.”

Reardon and other federal employee unions have largely said the past year did little to improve their relationships with the Trump administration. But he said NTEU has struck up positive working relationships with some agency leaders.

Food and Drug Administration Commissioner Scott Gottlieb was particularly helpful in finding flexibilities for food and safety inspectors during the shutdown, who were otherwise forced to pay for work travel out of pocket, Reardon said.

The union also had positive and productive conversations with Customs and Border Protection Commissioner Kevin McAleenan to resolve challenges for CBP officers who had called to take temporary duty assignments along the southern border.

IRS Commissioner Charles Rettig stepped in personally to resolve problems that NTEU bargaining members experienced when they tried to file for unemployment benefits during the shutdown. 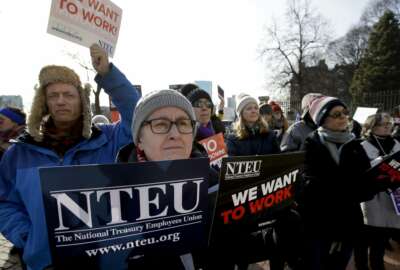