Federal employees now have an official way they can donate their time and money to their colleagues impacted by Hurricane Harvey and the following tropical storms.

The Office of Personnel Management set up an Emergency Leave Transfer Program, which lets employees in the executive and judicial branches transfer unused annual leave to their federal colleagues within the same agency or another organization, who need additional time off.

“We continue to reach out to impacted agencies to...

Federal employees now have an official way they can donate their time and money to their colleagues impacted by Hurricane Harvey and the following tropical storms.

The Office of Personnel Management set up an Emergency Leave Transfer Program, which lets employees in the executive and judicial branches transfer unused annual leave to their federal colleagues within the same agency or another organization, who need additional time off.

“We continue to reach out to impacted agencies to gather more information on the number of employees impacted by Harvey,” acting OPM Director Kathleen McGettigan said in a Sept. 1 statement. “As always, OPM stands ready to assist federal agencies in assisting their missions and in responding to the needs of federal employees.”

OPM decided a emergency leave transfer program was warranted after talking to other agencies about the impact the storms have had on their employees.

Impacted employees must apply for additional leave in writing to their agencies. Employees who would like donate leave must contact their own agencies. OPM has instructed agencies to begin determining who has been impacted and how much donated leave they might need.

OPM also this week issued a special solicitation, which allows agencies to administer and collect donations in support Harvey survivors.

The solicitation, which ends Sept. 29, lets federal employees may cash or check donations outside of the typical Combined Federal Campaign.

McGettigan said federal employees had expressed a desire to help those in need in Texas and Louisiana.

In addition to the OPM solicitation, the Federal Employee Education and Assistance Fund is also collecting donations for Harvey survivors. FEEA is reopening its natural disaster fund and is collecting cash or check donations online or by mail.

Impacted federal and postal employees employed with an agency and impacted by presidentially declared disasters can apply for a maximum FEEA grant of $500 to find temporary housing or make home repairs not covered by insurance.

Disaster relief is one of several areas where FEEA typically provides support, though its ability to give grants and loans depends on available funding. FEEA has helped more than 9,000 federal employees and their families during Hurricane Katrina and Sandy and others.

You donate to the FEEA natural disaster fund here.

Contracting officers supporting relief efforts for Hurricane Harvey received a little bit of a reprieve from some acquisition rules.

The General Services Administration increased thresholds for micro-purchases, for the simplified acquisition of commercial items and for simplified leases.

In a memo to Senior Procurement Executives (SPEs), GSA said because President Donald Trump declared a major disaster in Texas and Louisiana, “it meets the legal definition of ‘emergency’ in accordance with GSA’s Federal Acquisition Regulation (FAR), Class Deviation – Exercise of Special Emergency Procurement Authorities, allowing the thresholds to be raised. The increased thresholds will not expire until cancelled or incorporated into the FAR.”

Among the biggest changes for relief efforts is the increase in the micro-purchase threshold to $20,000 from $3,500 for civilian agencies and $5,000 for the Defense Department.

Contracting officers can use government purchase cards for many micro-purchases.

GSA says these threshold increases will remain in effect through Dec. 31.

“Contracting officers are required to give preference to local firms in the disaster area as discussed in FAR Subpart 26.2. The easiest way to do this is through local area set-asides,” the memo stated. “Contracting officers should also first consider small business local area set-asides when feasible. In addition, use pre-positioned or pre-existing contracts first, such as BPAs, schedule contracts, or IDIQs; Utilize local firms to the maximum extent practicable in response to major disaster or emergency declarations per FAR Subpart 26.2; Often, you’ll find that local firms are better situated to support recovery efforts; Limit competition when needed.”

GSA also reminded agencies that the head of contracting activity in each region can activate emergency response coordination to bring in contracting officers to support the relief effort.

After Hurricane Katrina in 2005, Congress and the administration made several changes to how agencies do acquisition during disasters.

For example, the Government Accountability Office said in a 2015 report that FEMA has more than tripled the number of contracting officers it employs, including establishing the Disaster Acquisition Response Team (DART) in 2010, which has the primary mission of deploying to provide disaster contracting support, such as contracting for blankets or debris removal.

In the 2009, Defense Authorization bill, Congress included a provision setting up the Civilian Contracting Corps, which is run by GSA and overseen and activated by the Office of Management and Budget. The voluntary group is activated on request by any agency and the experts can come from both civilian and Defense agencies.

It’s unclear if OMB activated the corps for Hurricane Harvey.

The Office of Federal Procurement Policy also issued an emergency acquisitions guide in 2011 to help contracting officers and others in the acquisition community prepare for and respond to disaster.

A whole of government effort

The federal response to Hurricane Harvey continues to grow.

FEMA says more than 21,000 federal staff, of which 3,500 are from the agency, are supporting of the Hurricane Harvey relief efforts in Texas and Louisiana.

FEMA says Byrne has more than 30 years of experience in disaster management and recovery program execution, including serving as the federal coordinating officer for Hurricane Sandy in New York and the 2011 Alabama tornadoes.

Additionally, the Corporation for National and Community Service (CNCS) deployed more than 450 AmeriCorps members to the region to support American Red Cross shelter and feeding operations, and FEMA’s disaster damage assessments and logistics. AmeriCorps members also are working to stand up a volunteer reception center. Additional requests for AmeriCorps disaster response teams are in development. These teams are trained to provide expert manpower for shelter operations, debris removal, and volunteer and donations management.

FEMA says it has provided to local communities in Texas:

“For survivors who have suffered damage and have federal flood insurance, FEMA’s National Flood Insurance Program is issuing advance payments of up to $5,000 for building and contents damages prior to an adjuster’s inspection to help get funds into the hands of survivors as soon as possible,” FEMA stated in a release. “If a policyholder has photos and receipts of out-of-pocket expenses, they may receive an advance payment of up to $10,000. As of 2:30 p.m. EDT on Thursday, Aug. 31, over 51,000 claims have been submitted in Texas.” 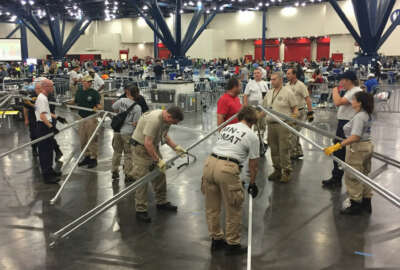