Reskilling, telework moving federal employees ‘toward the future of work’

The Office of Personnel Management and its partner agencies have spent considerable time and resources on pilots and programs aimed at building the federal workforce of the future, but personnel experts say the rapid pace of emerging technology can make some goals seem like a moving target.

Zina Sutch, the associate director of outreach, diversity and inclusion at OPM, said the rapid rate of change in technology and a growing expectation from younger generations in...

The Office of Personnel Management and its partner agencies have spent considerable time and resources on pilots and programs aimed at building the federal workforce of the future, but personnel experts say the rapid pace of emerging technology can make some goals seem like a moving target.

Zina Sutch, the associate director of outreach, diversity and inclusion at OPM, said the rapid rate of change in technology and a growing expectation from younger generations in the workforce to provide more feedback on their work stand out as two of the biggest workforce challenge in government.

Those two areas intersect, for example, when trying to manage a “virtual workforce,” and build relationships among teleworking employees.

“We’ve got people coming into the workforce that require that feedback, and want that feedback and feel engaged when they have that feedback and clear expectations. But we are stymied by the federal government system,” Sutch said Wednesday at American University’s Key Executive Leadership Conference.

“There’s a lot of good policies, but I think we haven’t figured out how to really do this,” he said, pointing to research that shows telework only well after coworkers get to know each other, which requires a combination of in-office and virtual work.

OPM has found that federal employees who use telework or other programs to balance work-life responsibilities report being happier and more engaged than their peers who don’t take advantage of these programs. The agency has also encouraged greater telework flexibility this summer in the D.C. region because of metro closures.

But other agencies have offered mixed messages on that flexibility, and several agencies — such as USDA and the Education Department — have scaled back their telework policies. OPM numbers released this year show that overall telework participation decreased in 2017 compared to the previous year.

“I don’t think how we have great teamwork and creativity in these virtual teams,” Eggers said. Improving productivity for virtual work, he added, would be “a multibillion-dollar sort of opportunity for someone” in industry to solve.

But telework stands out as just one variable for the workforce of the future. Eggers said his team at Deloitte has spoken at length with senior administration officials about reskilling, what the future of work looks like and how to adjust training at federal executive institutes.

“The leaders at OPM, OMB and [the General Services Administration] believe this is really, really important around the workforce,” he said.

The Office of Management and Budget, the Education Department and the Federal CIO Council launched its Federal Cyber Reskilling Academy last November, with the goal of shifting its first class of students from non-IT roles at their agencies to cyber defense analysts.

Interest in the reskilling academy remains high. OMB received more than 1,500 applications for the first cohort, and expanded the class size from 25 to 30 students. Applications for a second class, which would retrain federal employees already working in the IT field, closed in May.

Eggers noted AT&T has led the charge on reskilling at scale, spending more than $1 billion to retrain more than 100,000 of its workers. The company has also established partnerships with academic institutions to create massive open online courses (MOOCs).

“One of the key things is that government can’t be 20 years behind the private sector in moving toward the future of work. And I can tell you, every single company that we are working with around the world is undergoing this in different respects or another,” Eggers said.

Increased adoption of artificial intelligence and automation tools have driven the conversation on reskilling. Using Labor Department and OPM data, Deloitte found that even a modest investment in automation — speeding productivity up by 20% would save nearly 97 million hours and more than $3 billion annually.

A higher investment that speeds tasks up by 200%, he said, would save more than $1 billion and more than $41 billion.

While automation may free federal employees for high-value work, Sutch said managers should also better understand what tasks their employees would like to spend more of their time on.

“A lot of times people aren’t performing because they’re not enjoying their work,” Sutch said, but better aligning them for the tasks they enjoy, she added, has made them more productive.

An OPM employee who spends much of her workday pulling human resource data, for example, got the go-ahead to sign up for online data visualization courses, and now uses those skills at the agency to collaborate with her colleagues on the best way to present data in charts and graphs published in reports.

“Part of her job is now using that data in a way that brings her joy,” Sutch said. “I think those are the things that you will only know if you meet and talk, and develop trusting relationships so that they can feel free to tell you, ‘I hate this part of my job, but I would love to be able to do X, Y and Z.’”

“The use of data to solve problems and make decisions, that’s going to take some strong analytical skills and folks who are able to really make great interpretation from data and use of data and information. Because we’re in the information age, where everything’s available to you, how you make sense out of it and how you can utilize it is the big challenge,” Barnes said.

But in order to prepare agency employees for these jobs, NASS recently developed a career path guide that helped employees better understand how to develop certain skills in order to advance in their careers.

“I feel good about it, because now nobody has an excuse to come to me and say that I don’t know what to do, or how to get this skill set,” Barnes said. 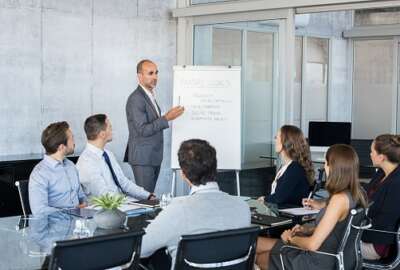