A 3.1% federal pay raise is a departure from the President’s proposed pay freeze for civilian employees in 2020. The Office of Management and Budget has described its vision to help agencies better manage existing funds to reward only the highest performing federal employees or those with critical skill sets — instead of implementing an across-the-board pay raise for all.

The Senate has yet to introduce a single spending bill for next year, and it’s unclear if the chamber’s appropriators will go along with the House proposal, reaffirm the President’s proposed pay freeze or make their own suggestion.

“The House’s support for competitive federal pay rates reflects the value of the critical roles federal employees play in keeping our country running safely, securely and efficiently,” Ken Thomas, president of the National Active and Retired Federal Employees (NARFE) Association, said Wednesday in a statement. “Passage of the bill today also sends a loud and clear message to the Administration that merging OPM with the General Services Administration (GSA) and moving civil service policy to the Executive Office of the President is not in the best interest of the American people.”

Notably, the House bill also takes a variety of steps to block the Trump administration’s proposed merger of the Office of Personnel Management with the General Services Administration.

The House bill doesn’t include the $50 million the administration had initially requested to carry out the merger. It also includes specific language that would prevent the administration from merging OPM with GSA — or carrying out any agreements that would facilitate further partnerships or shared activities between the two agencies.

Last minute amendments from Rep. Jason Smith (R-Mo.) to reverse this language and cut funding for OPM didn’t make it to the House floor for debate.

In addition, the final version of the House appropriations bill included an amendment from Rep. Gerry Connolly (D-Va.), which prevents OPM from carrying out furloughs or reductions-in-force (RIFs).

“I do not support what I perceive to be a retaliatory suggestion about laying off people at OPM,” House Majority Leader Steny Hoyer (D-Md.) said from the House floor of the OPM-GSA merger. “In other words, if we can’t merge it, we’re going to lay them off. Frankly, if there is evidence that there are too many people and enough people to do the job that is being done and that we can either transfer people to other agencies that might need them, that’s one thing. But I don’t think that’s the evidence that we see.”

Hoyer, along with Connolly and D.C. Del. Eleanor Holmes Norton, told members of the American Federation of Government Employees at a Tuesday rally against the OPM-GSA merger they would fight the proposal. They said they still lack enough details to demonstrate why a merger with GSA would make the most sense and argued the administration’s plan lacks depth.

Connolly will lead a hearing in the House Oversight and Reform Government Operations Subcommittee on Thursday with administration officials in effort to receive more information and documentation about the OPM-GSA merger.

It was revealed last week the Trump administration is considering furloughs for some 150 OPM employees if Congress either doesn’t agree to advance the merger — or if lawmakers can’t pass full-year appropriations for the agency by the end of this fiscal year.

OPM faces a $70 million shortfall when the agency’s National Background Investigations Bureau and its security clearance business moves to the Pentagon on Oct. 1.

“While some components of the proposal have merit toward making government function more effectively and efficiently, FMA’s concern with removing OPM’s status as an independent establishment outweigh the potential benefits,” the association’s president, Renee Johnson, said in a statement.

In addition, the $24 billion financial services appropriations bill included $12 billion for the IRS in 2020, a nearly $700 million boost over 2019 funding levels. Specifically, the IRS would receive an additional $67 million to improve taxpayer customer service, $140 million more for the agency’s business system modernization efforts and $297 million for enforcement operations.

“For an agency that has lost 23,000 full-time employees over the last nine years, the renewed investment is a welcome sign that Congress is ready to reverse the decline and rebuild the IRS’ workforce, enforcement activity, technology and customer service to even higher levels,” Tony Reardon, president of the National Treasury Employees Union, said Wednesday in a statement.

Another amendment from national capital region lawmakers would prohibit funds from being used for the Agriculture Department’s relocation of Economic Research Service and National Institute of Food and Agriculture employees to Kansas City. 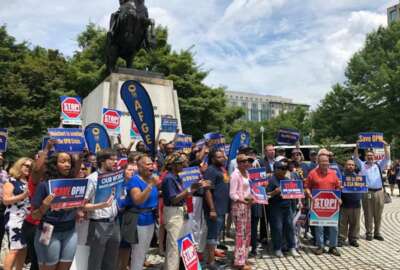