The number of Hispanic federal civilian employees working at the largest agencies increased for the fourth year in a row, according to the latest report from the Office of Personnel Management.

The report, which looked at Hispanic representation in the federal workforce during fiscal 2014, found an increase of 461 on-board employees between fiscal 2013 and 2014, or a 0.1 percent bump.

“The data shows that we continue to make steady progress in improving the representation of Hispanics in Federal service,” said OPM Acting Director Beth Cobert in a blog post about the report. “The numbers also indicate that agencies that have made the recruitment and retention of Hispanics an important part of hiring and inclusion have shown more progress.”

OPM has issued a report on the Hispanic federal workforce for 14 years. In 2000, Hispanic permanent federal civilian employees represented 6.5 percent of the workforce. Since 2000, that percentage has incrementally increased — the largest increase being 0.3 percent between 2006 and 2007 — though the percentage remained flat at 8.0 percent in 2009 and 2010.

But that slow and steady progress has some advocates worried.

Hector Sanchez, chairman of the National Hispanic Leadership Agenda, said at that yearly pace “we are never going to close the gap.”

“We are very worried not to see serious changes in the numbers,” Sanchez said. “We need bigger commitment, and something that we propose as a coalition is a presidential executive order. We need serious leadership on this issue and this has to come from the president, too.”

Cobert highlighted the Social Security Administration, the Defense Department’s Contract Audit Agency and NASA as agencies that have continued to stand out in their recruitment and retention of Hispanic employees.

“The common thread among them is that these agencies target their recruitment in geographic areas that have high Latino populations; have active Hispanic Employment Program Managers; engage with their Hispanic employee resource groups; and reach out to students and job-seekers through colleges and universities, at job fairs, and other employment programs,” Cobert said.

Among new hires in the major federal agencies, the SSA saw a 13.3 percent increase from 2013, with an additional 785 new hires.

At DCAA, 66 percent of new auditor hires in fiscal 2014 were Hispanic, the report found. NASA meanwhile, has Hispanic Employment Program Managers at all of its 11 field centers and its Washington headquarters.

The report also found that the number of Hispanic new hires in the Senior Executive Service increased from 3.5 percent to 5.5 percent.

Sanchez was critical of the “underrepresentation” in the Department of Health and Human Services.

“At a time when [HHS] is implementing one of the most important pieces of legislation, it’s unacceptable,” Sanchez said. “We need to have our community being represented, especially in this case. This is one quick example that really highlights and shows how important it is to have representation of Latinos at all levels of the federal government.”

Among the ongoing efforts to recruit, retain and advance Hispanics in the federal workforce, Cobert said she is also implementing the President’s Management Agenda, People and Culture Platform.

The agency has also renewed the Hispanic Council on Federal Employment, Cobert said, which will give her recommendations and advise her on certain practices. 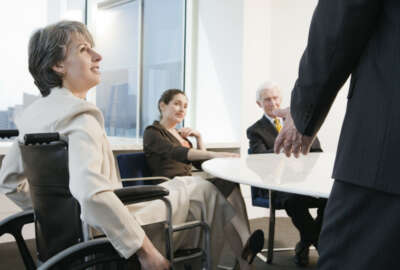 Record number of people with disabilities in federal workforce