The Trump administration’s new federal management leaders have an ambitious and aggressive plan to modernize the civil service for the future, and they’re optimistic that this time, they can make their ideas a reality.

But few things will change if the administration can’t reach common ground with all of its stakeholders — including members of Congress, good government groups, federal unions and federal employees themselves.

“We can actually make a difference today, because we want this to...

The Trump administration’s new federal management leaders have an ambitious and aggressive plan to modernize the civil service for the future, and they’re optimistic that this time, they can make their ideas a reality.

But few things will change if the administration can’t reach common ground with all of its stakeholders — including members of Congress, good government groups, federal unions and federal employees themselves.

“We can actually make a difference today, because we want this to be a bipartisan discussion,” Margaret Weichert, deputy director for management at the Office of Management and Budget, told the House Oversight and Government Reform Committee Wednesday at a hearing on the President’s Management Agenda and plans for the federal workforce. “We want it to be a discussion between Congress and the executive branch. We need this to be an inclusive conversation, because this isn’t just rhetoric. We really want to make a difference here. When I look at it from 3,000 feet, if we don’t, we don’t have a delivery model for the 21st century.”

“We continue to come to these hearings,” he said. “We continue to hear great opening statements. Why is this going to be any different than any time in the last 40 years?”

This time, the administration is looking at these challenges in an integrated and holistic way, Weichert said. The administration can’t transform the  federal workforce without focusing on modernizing IT systems and giving employees better data to use.

For the most part, there’s a lot of common ground among leaders in the Trump administration and good government groups, such as the Partnership for Public Service and Senior Executives Association, who say they agree with the broad principles in the President’s Management Agenda.

But not everyone is on board.

The American Federation of Government Employees (AFGE) described the PMA as a “set of worst practices,” designed with “dark” political intentions in mind.

“If the PMA were implemented, it would sabotage the civil service and agency missions incompatible with this administration’s political priorities,” AFGE Policy Director Jacque Simon said. “The administration’s apparent goal of making the federal government an employer of poorly compensated, contingent workers is not, I repeat, not what the workforce wants.”

The National Treasury Employees Union had similar harsh words for the administration’s workforce agenda. In a statement, NTEU President Tony Reardon described the PMA as “a systematic assault on middle class federal workers that would chase talented civil servants into the private sector.”

The unions’ dissent, however, wasn’t much of a surprise to members of the oversight committee. When asked to describe the Trump administration’s relationship with federal unions, Weichert said it supported employees’ rights to organize.

“We would like to have a productive dialogue on the items around the workforce of the 21st century,” she said.

Everyone who cares about good government should come to the table to discuss these ideas, Weichert added.

“They’re not so good right now,” Pon said of the administration’s relationship with federal unions. “I’m trying to build a relationship with the unions since I am new to the position of OPM director. I’m wanting to meet with them, hear what they have to say, hear their ideas [and] make sure that there is an open dialogue so they can help us and we can help them on the things that they we agree on. There’s not too much right now that we agree on.”

For Rep. John Sarbanes (D-Md.), he agrees with the rhetoric and ideas in the President’s Management Agenda, but he understands where the unions’ opposition might be coming from.

“It’s not a good operating premise to go into the room with the unions, or with the workforce, and say we’re going to take a baseball bat or a meat cleaver to the budget that’s supporting your operations, and after we do that, we want to have a constructive discussion about all the ways we can find you efficiencies and streamline things and so forth,” Sarbanes said. “You’re not going to get people to stretch, to be creative, to be innovative, to self-reflect, which are admirable goals.”

Weichert said the concerns were valid, and the administration is seeking employees’ feedback and input. The administration launched the PMA in Kansas City, Missouri, where she and other federal leaders met with employees.

Meadows has conducted his own agency listening tours and said he’s been impressed with employees’ recommendations.

“I’ve been fascinated by their ability to give great suggestions on how we might improve the efficiency of the federal workforce,” he said. “Their recommendations are better than any that would come out of this committee on either side of the aisle.”

Sarbanes referred to the administration’s proposed budget and staffing cuts, but he also mentioned the four legislative proposals OPM sent to Congress earlier this month.

“How are you going to recruit the workforce of the future if you’re coming with these dramatic cuts?” he asked.

Unsurprisingly, those proposals gained a lot of attention from members of the committee, especially Democrats.

Changes to the current retirement system, by OPM’s estimate, would save $143.5 billion over the next 10 years.

Pon reiterated a previous message: these changes to the current retirement system are an attempt to make a “downpayment” on the future workforce. He said he wants agencies to focus resources on retraining and up-skilling current and new federal employees for different kinds of work. The administration wants to invest $1 billion, through a new federal workforce fund, for training and professional development, Pon said.

“What happened to the other $142 billion? Come on, man,” Cummings said.

“We’re supporting the president’s budget as [it] puts and takes across the whole, entire federal government,” Pon said.

Data from the most recent Federal Employee Viewpoint Survey shows the administration that pay and compensation aren’t the biggest concerns for federal employees, Weichert said.

“Oh, oh, whoa, whoa, whoa. Rewind. Say that again,” Cummings said. “They say they like them, the amount of money they’re making?”

“Sixty-one percent of federal employees surveyed in the Federal Employee Viewpoint Survey were satisfied,” Weichert said. “Considering everything, how satisfied are you with your pay? That’s actually above levels you would see in the private sector around pay, for example.” 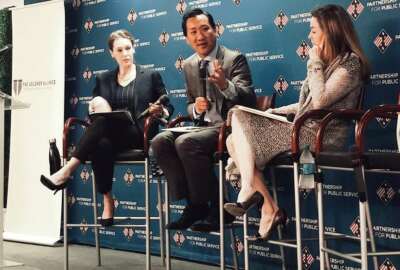