Democrats on the House Oversight and Reform Committee are demanding more details from the Trump administration about its proposed reorganization of the Office of Personnel Management, after multiple requests for information have come up mostly empty-handed.

“To date, the administration has failed to provide the committee with the plans or any detailed justification,” Rep. Gerry Connolly (D-Va.), chairman of the Oversight and Reform Government Operations Subcommittee, wrote Thursday in a letter to leaders on the...

Democrats on the House Oversight and Reform Committee are demanding more details from the Trump administration about its proposed reorganization of the Office of Personnel Management, after multiple requests for information have come up mostly empty-handed.

“To date, the administration has failed to provide the committee with the plans or any detailed justification,” Rep. Gerry Connolly (D-Va.), chairman of the Oversight and Reform Government Operations Subcommittee, wrote Thursday in a letter to leaders on the Appropriations Committee and Financial Services and General Government Subcommittee.

The administration briefed committee staff on the OPM reorganization, but the information they provided lacked detail, Connolly said.

“The administration also failed to provide written legal analysis of the authorities needed for the reorganization despite repeated requests for the information,” he added.

Connolly and others have mentioned their concerns with the proposed OPM reorganization in passing, but Thursday’s letter is one of the first times that a group of lawmakers of this size has publicly critiqued the administration’s plan.

Nearly all Democrats on the House Oversight and Reform Committee have signed the letter, in addition to Majority Leader Steny Hoyer (D-Md.), Don Beyer and Jennifer Wexton (D-Va.), and David Trone and Anthony Brown (D-Md.).

“We have grave concerns about the administration’s proposal to dismantle OPM and shift its functions to [the] General Services Administration, the Department of Defense and the Executive Office of the President,” the members wrote. “We are also troubled that the administration has failed to adequately consult with Congress on the merger and reorganization plans.”

A committee staffer said members are also concerned about the sheer amount of change management efforts that a reorganization like this would require. The committee wants to ensure the administration is following best practices that any public or private sector organization should follow in moving large groups of employees and services that the federal workforce depends on, the staffer told Federal News Network.

The President’s 2020 budget requests $50 million to cover the initial costs of the Trump administration’s proposed merger of OPM functions to GSA. It includes no other details that describe how many employees might be impacted or how the administration expects to address financial uncertainties that would likely come with moving OPM functions in phases.

But until the committee receives this information, Connolly is urging House appropriators to prohibit the use of funds for the reorganization. In addition, he suggested they include appropriations language that demands the following:

Thursday’s letter follows a separate one that Connolly sent to acting OPM Director Margaret Weichert, which invited her to testify on the reorganization proposal at subcommittee hearing scheduled for May 1.

To prepare for the hearing, Connolly has asked for a long list of documents related to the OPM reorganization, including plans, a timeline, proposed inter-agency agreements and a wide array of communication, meeting notes and other reports prepared by outside consultants who are working on the merger.

In addition, the subcommittee is asking for the risks associated with transferring OPM functions to GSA and the Pentagon. Perhaps most notably, members are looking for GSA’s plans to be a “custodian of personally identifiable information and personal health information currently managed by OPM and stored in OPM IT systems, including applicant information.” They also want to know how GSA will address cybersecurity vulnerabilities that its own inspector general has identified.

Weichert said last month that the administration plans to submit a legislative proposal outlining what OPM functions would need congressional authority to move to GSA.

According to the 2020 request, HR Solutions, OPM’s in-house, fee-for-service organization that manages USAJOBS.gov, USA Staffing and USA Hiring, among other projects, as well OPM’s IT, will move to GSA in fiscal 2019.

OPM’s Retirement Services and Healthcare and Insurance organizations will move to GSA in 2020, according to the White House request. The National Background Investigations Bureau (NBIB) is supposed to move to the Pentagon by Oct. 1, but an executive order authorizing the transfer is still pending. 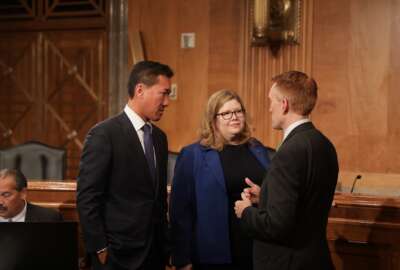